Succubi Image of the Week 758

A Review of Gender Swapped, The Fertile Succubus by Felicia Dumont 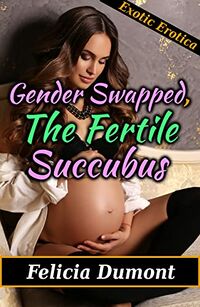 There are, of course, many variations of succubi that authors create within their stories. It’s interesting to see what sort of character attracts them, who they are, and what as succubi the character is to be. It’s not a question of them being evil or not, though I have mulled over there being far too many stereotypical succubi of course.

Within this creation the larger question becomes what drives them, what brings others to them. Perhaps more telling is the question of what happens when what the character thought they knew is revealed to be shaded from them and now their new reality is all but irresistible to themselves and to others.

In the basement of his apartment building, Vance discovers a strange ring. While innocuous at first, this ring holds the power to change Vance’s life forever. Waking the next day, he discovers that not only has he been transformed into a girl, but he’s become a succubus as well. As Vance searches desperately for answers, not only will he have to contend with his own new lusts and desires, but he’ll have to be cautious of others as well. Will he succumb to his new personality and be driven into the arms of someone he’s not meant to be with? Or will a glimmer of hope appear, when an unexpected visitor comes knocking on his door? Join Vance on a journey that has him transforming into a gorgeous succubus, resisting temptation and falling for someone he knows will treat him like he deserves.

Vance is sleepwalking though life, managing as best as he can. An unexpected discovery takes him to a new world and a new existence. Now Vanessa, and a succubus, the answers seem just out of reach, teasing for her to keep looking. Sometimes what you are looking for was in front of you the entire time, you just weren’t able to see it.

The work is a gender transformation story with a strong emphasis on the main character’s succubus transformation. While the transformations are quickly passed over, that doesn’t harm the story overall. Once past the somewhat scattered beginning, Vanessa’s search for an explanation of what she is, why this happened to her, is the core of the story.

It’s that exploration that I thought was delightful. It’s a long and slow discovery which really it needed to be. The questions aren’t all answered, perhaps they were never meant to be. But in the search comes a slow acceptance of what her world has become and what trials she will face.

The erotica is written lightly, there’s a real sense of joy between Vanessa and the one she becomes entwined with by the end of the work. I thought the resolution of the moment they met might have been a bit too quick, the change in attitude of both characters might have been something more if they’d been able to sort out themselves without the needs that pressed on them both.

Much like other works by this author with a succubus theme, there’s a world outside that isn’t really explored more than necessary to get Vanessa into it. The characters she meets expect her to know what’s going on and that seems a missed opportunity. Really at some point there needs to be a story about the succubi themselves beyond the transformation into being one. There’s a lot of story there and I dearly would like to see that.

The story has its moments, possibly the most interesting being the exploration of what Vanessa is as a succubus. Still, there’s the question of the larger universe that is teased and not really explored once more. It truly would be wonderful to know more about this world and what connects everything together.