Succubi Image of the Week 757

A Review of Manor of the Succubus by Jay Aury 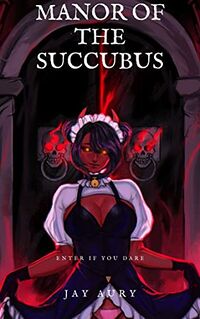 Manor of the Succubus by Jay Aury

Choose your own adventure stories overall don’t work for me. They are missing something in the telling, the characters aren’t fully realized, It’s often that the story is scattered, repetitive, and the branches aren’t really that different. But when the adventure is told well, that can be delightful.

A review then of a choose your own adventure by Jay Aury in which the story is interesting, the paths diverge and mix together well. Most of all, the characters bring me a smile, but then unique succubi are always fun to discover.

Inheriting a manor from your late, great uncle was a surprise. Discovering it’s filled with randy demon girls all wanting a taste of your soul was an even bigger one. Now, with nothing but an enchanted sword, some potions, and a whole lot of luck, you’ll take the battle to the demon girls. Will you escape? Or will you fall prey to the Manor of the Succubi!

Sometimes what seems to be too good really is. Other times, what you think should be becomes something more. The future really is what you make of it. But even so, there’s always a temptation waiting to change your mind if you want to. Or not.

The work is a very involved choose your own adventure in which the story is told from a first-person perspective. There’s a number of varied paths, almost all of which turn towards some sort of succubus erotica at some point. That’s not to say there are other ways which aren’t quite such a temptation however.

It’s in the discovery of the branches, the twists and turns, the temptations that the succubi offer, where the story is at its best. There are some branches which are, I think, far too short and could have been explored more than they were. Still, the succubi are a delight and that’s the main thing that really appealed.

There are very few CYOA works that I really enjoy and this particular offering I thought was really well done. That said, the overall setting and characters would make a really good place for a series to be written from. There’s a lot of universe and story to be explored and I think that’s really something for the author to consider.