Succubi Image of the Week 756

A Review of Possessed: Lilith Erotica by Dennis Maier and Cholly Knickerbocker 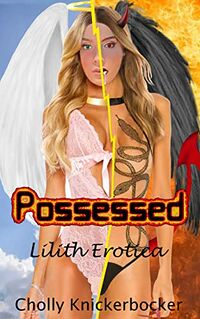 Lilith, myths and legends about her, and certain themes appear in stories from time to time. Sometimes they are more fantasy based, others tell a more grounded story overall. Sometimes the story told is really less about Lilith herself than it is a reflection of the main character trying to understand themselves and what happens to them.

Perhaps in that path of self discovery Lilith is more a means to enlightenment than what else she might otherwise be.

This is my true confession: I am possessed by a supernatural being that dominates me body and soul, forcing me to commit terrible sins of depravity and lust. If my mother or the Church ever found out they would crucify me. I fear them now that I have escaped their domination into the loving arms of my beautiful neighbors who waited for me to come of age. Why? Since our steamy ménage à trois I fantasize about them constantly, her breathtaking curves, her sweet kisses all over my tender young body. She is more of a mother to me than my real mother who now seeks to destroy me. Am I gay? No, I don’t think so. Can I be a lesbian if I love him too? Not like a daddy but a verily handsome alpha male–despite the age gap.
Thinking about them both now leaves me short of breath, flushed, and tingling with excitement. But I am also confused and conflicted, caught between the Church and my loves who opened up a secret world I never dreamed existed. Am I being led to hell by them, by the demoness Lilith, or am I freed, my own woman at last?

The path to understanding of one’s desires takes many turns. It’s never a simple thing, there are always questions seeking answers. Is the reality what we believe or is it the expectation of something other we cannot understand?

The work is mainly a mixture of self-discovery with some tepid erotica that appears from time to time to push the main character forwards on their quest. Written in something of a journal for the most part, it tells the path of the main character in finding a way to understand themselves through the theologies they have been taught and the new ideas they have been offered.

Lilith is referenced many times in the work, though she really never appears in it to any real extent. There are hints of her, but it’s mainly focused on the beliefs of those that follow her word. There might be the barest hint of succubi once or twice, but not much more than that.

The writing is a bit odd overall, both in the narrative and the dialogue. It’s uneven and seems to be trying to find a way to express the ideas the main character has and the events around her, but can’t quite manage it well. Perhaps a bit more time unraveling the story more would have helped as there’s a lot of missing pieces and the main character just doesn’t quite have the means to tell her story.

That well could be part of the theme, part of the way the story is told. But it hurts the story overall and just makes things more difficult to follow than they needed to be I think.

It’s not a story about succubi exactly, nor is it really at the core a story about Lilith. It’s a bit of a difficult read, but there are moments that make this interesting overall.