Eternal – Part I by TeraS

A Review of Love the Sin, Hate the Sinner: A Demonic Romantic Comedy by Latrexa Nova 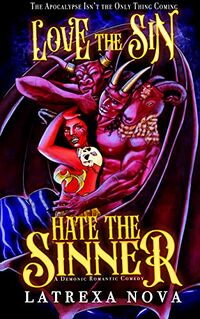 Love the Sin, Hate the Sinner: A Demonic Romantic Comedy by Latrexa Nova

Some of the best stories come from taking an irreverent look at what characters find themselves in. Keeping up that humour can be really hard to do, but when it is done well, I am bemused.

A review then of the first work in a series by Latrexa Nova which offers quite a lot, has the characters to make the story work well too. Hopefully it’s just the start to something delightful.

Our lust for each other could shatter reality.
Asta: I only had one summoner left just begging to feed me her sin, and then I was supposed to be home free, finally soaking my aches in the fiery hot springs of the Fifth Circle of Hell for my vacation. Then they showed up. Asmodeus. Cocky, entitled, and a King of Hell, they’re top of the list for demons I’d like to crush under my foot after what they did to me. The worst part? Three hundred years without seeing them did nothing to break the irresistible tension between us. I want to bite their head off and get my mouth on that glorious incubus body all at the same time.
Asmodeus: I thought I was over Asta breaking off our friendship over a stupid prank. After all this time, I should have been. I had plenty of easily seducible humans to get over Asta. So how could I have expected the one time I get summoned in all those years would put me in their path? Now that we’re forced to complete our summoners’ deals together, I can’t get Asta out of my mind—which sucks (and not in the fun way), because if we act on our desires, it could spark a literal apocalypse. But one true taste of sin might just be worth damning all of creation.

Love and lust, from what Asta and Asmodeus have been told, should never be one. Especially for succubi and incubi for that would not be bad, but so very, very, very bad for everyone. Still there are some things which cannot be avoided, events happen that there is no means to control. It’s far worse when the universe itself has decided that they are going to be in more trouble than they could ever imagine.

The work is a well told comedy with some interesting story gymnastics which take various theologies and turn them inside out. It’s irreverent, the characters are both sarcastic and amusing in their own ways as well. It’s not so much focused on erotica or being evil exactly because the humour overrides everything else for the most part.

The succubus of the work, Asta, and Asmodeus, the incubus of the story, make for a delightful couple. They fight and argue, gripe about each other and there’s always something that one does to twist the other’s tail. They aren’t necessarily evil, really more naughty than anything else and I rather adored that aspect of them both. As such, they aren’t stereotypical and their characters build very much on that fact which brings a lot of favour to the story.

It’s a cute and fun story which goes running in a lot of different and unexpected directions. Perhaps a bit rushed, though that is mainly from the characters themselves being a little over the top sometimes.

The sarcasm bemuses me, the story works really well and where things end up promises quote a lot for what comes next. I’m looking forward to that, I think it will be a lot of fun.