There are better gloves really

A Review of Saving Supervillains by Bruce Sentar 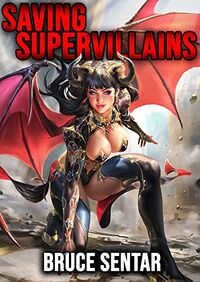 Stories set in a superhero universe almost always have the succubus character be evil in some way. Overall that’s really quite boring as it just sends the character in a stereotypical direction. But, occasionally there’s a twist that offers something better, something more captivating and fun that makes the story worthwhile.

A review then of the first work in the Saving Supervillains series by Bruce Sentar in which there’s laughter, delight, discovery and, most telling of all, the realization that there’s always a way to do, and be, better than you are.

A former villain is living a quiet life, hidden among the masses. Miles has one big secret: he might just be the most powerful super in existence. Those days are behind him. But when a wounded young lady unable to control her superpower needs his help, she shatters his boring life, pulling him into the one place he least expected to be—the Bureau of Superheroes. Now Miles has an opportunity to change the place he has always criticized as women flock to him, creating both opportunity and disaster. He is about to do the strangest thing a Deputy Director of the Bureau has ever done: start saving Supervillains.

Miles thought he was safe from his past. He thought that he could stay under the radar of the world around him and just be left alone. But an encounter with someone in dire need cracks open his life and pulls him kicking and screaming into the world he didn’t want any part of. There are very few that can understand superheroes and villains, there are even fewer that can help them from their own darkness to something better.

The work is a mixture of superhero adventure, harem building and a bit of erotica around the edges. It’s very male dominant as the work is told from the main character, Miles’ point of view. While these themes run throughout the story, there’s a good deal of the work which takes time in exploring those that encounter Miles and how that changes him and them for the better.

The succubus of the work, Stella, appears physically to look like a succubus, her powers are similar to that of a succubus, but she isn’t quite one. She’s very close all things considered, but her personality, her needs, and really the innocence when she is first encountered, gives her something unique to expand on as the story is told.

It’s delightful to see Stella grow in the story, to find confidence that Miles gives her. More so, the insight she has about Miles and others just tells of now complex a character she is. Yes the sex comes in time, and it’s emotionally wonderful when it comes to be. If the story was only about her, that would be enough.

The plot grows and expands, the character list gets longer and longer as the universe around Miles pushes towards him. There’s a lot of conflict within him, there’s moments when it’s questionable what he might do next. That keeps the story alive, the interest remains, and it’s just a really fun page turner from start to finish.

Written well, the characters are fully realized, they aren’t the same from where they were at the beginning when the conclusion comes. It’s a fun read with the emotional context that similar stories seem to lose for the sake of the erotica.

It’s just a really fun story overall which thankfully doesn’t turn into being stereotypical at any point. Stella is just adorable and so dearly cute as the succubus she might be, but in a good way.

I really want to see her, and the other female characters that are trying to find their way, become more than they are. Stella is on her way there, I hope that means something good will be found. I will be looking for further works in this series just to see what happens with Stella most of all.