A Review of Demon With Error by Lika Star 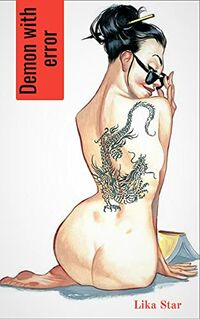 Demon With Error by Lika Star

Sometimes a story doesn’t quite manage to express itself as clearly as it might otherwise be. Perhaps the dialogue is odd, or there’s a feeling that the story was translated from another language, losing some of the story along the way.

It’s a shame when this happens with a story that has emotion, need, want and more within. A barrier to those ideas and concepts just makes things so very difficult to gather and understand which leaves a lot of want when the story has been told.

I am running. I keep running and hiding. I’m haunted by HE, the one who mangled my life and turned it into hell. Succubi (seductive demons) don’t fall in love? Yes everything is correct. Their very strength is their protection. Only at a young age, when abilities are still in their infancy, is there a risk. Well, who falls in love playing in the sandbox? No one but… my sworn enemy, my childhood nightmare, my hated succubus with a defect.

The world isn’t the kindest of places. Many of the wants we have are trapped in the desires of others around us. When the past returns unbidden, there can be little but to try and exist in spite of it all.

The work is a rather sad tale of conflict, need and discovery that is expressed in the view of the main character as they try to deal with those around them and the one that hurt them before.

It’s a complicated read made more so by the way the story is told. There’s an anime feel overall, a sense of the story trying to put into words things that might be better communicated through images in many moments.

The succubus of the story is, and isn’t one. They have some aspects of being a succubus, but it’s shaded and unclear. Their actions and character don’t quite have the feeling of being succubus-like, though that might be more of a missing piece of the puzzle that I couldn’t quite get hold of.

I found it very difficult to get into the work deeply as a result. The language, the dialogue and the events of the story just didn’t quite fit together well. It well may be that English is a second language for the author which makes the story difficult. I’ll freely admit that the story interested me, and I wanted to enjoy the telling so dearly, but I just found so many oddities that I couldn’t really have that wish be true.

It’s really not a story about a succubus per se. There are hints and vague connections through the story but there’s really nothing that drives things in that direction. Complicated, a bit difficult to read due to the oddities of the writing overall also makes this a work that doesn’t quite communicate the story as well as I wanted which is the real shame here.