I suppose there’s something this mask will work with…

A Review of Daemonica by Lara X. Lust 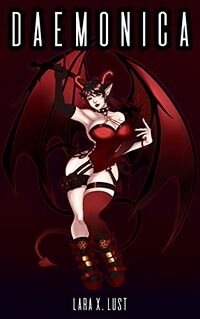 Stories about characters with lost souls have their moments, both good and bad. It’s a function of the theme, the events and what the characters find themselves involved in. Sometimes mixing other themes into that setting results in a unique story to tell.

Not all things are bad or necessarily good. It’s a question of what matters when you have to trust someone and where that brings you. Perhaps that can make all of the difference.

When Armageddon came, I lost everything. Empty handed and alone, I’m left to wander the wastes of America, searching for survivors, supplies and a new home. Halfway to death, I meet a woman named Jill, a certifiable tough-chick with a stone-cold exterior and a heart of volcanic rock. It’s up to us to rebuild and to start over. But something has decided to follow us into the night…

Life isn’t fair, sometimes it’s a complete mess. Dex had a life, but the world went to hell and took everything that was good with it. But a chance encounter brings possibilities and with them comes the unexpected. There will never be a return to the good days but building something new might be a start.

The work is a mixture of adventure, erotica, monster girls and a fair bit of self-examination and discovery that works well overall. It’s quite involved, the world building is well done. The characters are well told and generally aren’t two-dimensional.

It’s a harem story with a succubus character, not a succubus story overall. Ally is interesting. If not really present in the overall story as much as I would have liked her to be.

It’s interesting, a follow on work might be a good idea as the ending leaves a lot of threads upon. Perhaps there will be.