A Review of The Demon Within 2 by Adrian Adams 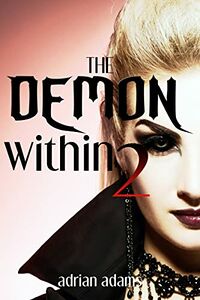 The Demon Within 2 by Adrian Adams

A review today of the second work in the Demon Within series which continues the journey of the main character, confronts her with a new reality, and turns the story forward.

Coming of age for a succubus brings with it a change in mind and body. But it also brings a question which needs to be answered of whether they are themselves or becoming someone else.

Brooke’s physical changes came as a shock, but what’s worse is now she can feel her mind changing, desires arising that can only be demonic in origin. Now she has to not only fight to keep herself loyal to her girlfriend, but also stop herself from going too far with her too fast.

The truth has arrived for Brooke and there’s no denying she is the daughter of a demon. She has the horns, there are more changes coming which can’t be stopped. Losing herself in the shadows of her new self seems just ahead, or is there a part of her life that she can hold onto and be herself still?

The work continues on immediately after the prior work with Brooke facing her physical changes and feeling the effects starting with her mindset. The physical changes, her new horns and the beginning of her futa form, offer a hint of what’s to come in that respect, but overall it’s the mental changes that are the focus here.

That’s very well told, there’s a darkness creeping into her personality that comes out and creates some uncomfortable situations. It also offers a clue as to what being a succubus will mean for her. The internal struggle Brooke faces I found to be cute telling and dramatic.

There’s a bit more erotica in this part, being between Brooke and her girlfriend. There’s a feeling of some mind control aspects, certainly infatuation, which adds some heat to the scene. Overall however, it’s an exploration of Brooke’s futa part of herself and the thoughts brought on by her girlfriend.

The erotica seems to be told in a rush however. Being how short this work is, like the first part of the series, it’s a shame that more time wasn’t spent on telling more of the relationship between them. Similarly, the moments of darker thoughts and desires might have been dwelled on and brought more character development.

The transformation aspect isn’t finished, the succubus aspects of the story are just coming into focus now. There’s an interesting place for this to go, the story has promise. The question is at what point does Brooke fully become a succubus and what exactly does that mean?

The story is just turning towards some aspects of a succubus story and with that comes a lot of things for Brooke to deal with. I wonder how far things will go, will there be a tail appearing, perhaps something more. But it also asks the question if Brooke will be herself or if she’s someone else. It’s an interesting point to turn the series on.