It’s different as a costume, but that doesn’t make it a good one

A Review of Succubus Seduces the Hot Girlfriend by Reed James 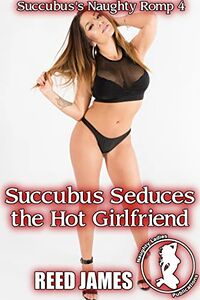 A review of the fourth work in the Succubus’s Naughty Romp series by Reed James today. Overall I find myself wondering about the path the main characters are taking and where that will wind up.

There should be a point at which a price needs to be paid and I wonder what that might, if it will, be. Sex is just sex, except if you are a succubus that’s hungry.

Jezebel can’t help but be thrilled in how naughty Trent is becoming and all of the fun she’s having with him. But seeking the impossible dream sometimes can bring about nothing but nightmares and disaster if one isn’t careful. But that is Trent’s problem, not Jezebel’s after all.

The work follows on immediately from the prior work with Jezebel making another of Trent’s dreams come true, pushing Shannon into having sex with him. Once more Jezebel is in the story, but really acts as a means for things to happen, adding some heat to the erotica and in a way gloating over what happens to Trent.

The erotica continues to be adult movie levels of heat, Trent has his way with Shannon and then the story moves onwards, but with some consequences coming finally with all Trent has been doing.

Jezebel remains static in the story, she’s not evolving and a lot of the interest in her at the beginning I had is waining which really is a shame. She lusts with Trent and then disappears to look for his next focus on desire. There should be more than that. The harem theme is also really becoming very central in the story and that’s making things feel a bit cartoonish overall which it really shouldn’t be.

The story still feels rushed, the plot being pushed aside for the sake of the erotica once more. I still would like to see more seduction. The teases from Jezebel are really delightful and I think having her be more of a presence, more manipulative, and perhaps being something a lot more than she seems to be, would change the story into something a lot more interesting.

There’s really no character development or progress for Trent or Jezebel again. It’s becoming kind of expected and repetitive in what happens in each part and I hope that changes. Jezebel remains mostly a mystery and really there should be at least one book that just puts Trent aside so her plans and plotting can be told. Given where things close in this part of the story, that’s not likely to happen, but it might open a path for Jezebel to get something more out of things than what she’s getting from Trent. We shall see.