Succubi Image of the Week 748

A Review of Silvanus the Incubus: Welcome to my Den of Sin by Leith Brooklyn 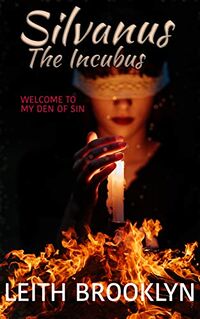 Silvanus the Incubus: Welcome to my Den of Sin by Leith Brooklyn

Sometimes a story has a certain sense of expected resolution that seeps into the characters. It gives an edge, a viewpoint and, most often, brings a dread of melancholy which settles in and doesn’t leave.

Perhaps in that foreboding, the story finds its place and carries on. Still, there’s something about being lost and obsessed that takes a character and leaves them, and the story, wanting.

Claudia Graves has had no luck with human men, she lives single and alone in a dank studio apartment with perpetually broken air conditioning. During the day she works a soul draining office job until one night she is visited by an incubus named Silvanus.
She realizes Silvanus is what is missing from her life, but when he leaves her she’s willing to go to the depths of the world where humans are the minority, and she’s in perpetual danger to be reunited with her dark lover. But does she know what she’s getting into as she searches for his den of sin?

Claudia’s life is without colour. There’s nothing that gives warmth to hold in the darker moments. An encounter with Silvanus, who she finds to be irresistible, drives her to seek him out in a world just beyond the monotone one she knows. But all things come with a cost and Claudia will discover how much she will need to pay.

The work is a very short piece of light erotica which tends to retain a very somber tone throughout. It mainly focuses on Claudia, her experiences, and the depths to which hr soul plummets as the world becomes less important against the seeming promise of Silvanus.

Silvanus, the incubus of the work, actually appears for a very limited part of the story. He’s there in the background, in Claudia’s thoughts, but he’s not actually that involved in the story save for capturing Claudia. Very much a seemingly stereotypical incubus, his focus is on controlling Claudia and gaining what he wants from her.

The story reads very flat in tone, it being really very sad and having little colour or warmth as a result. Overall adding ten or so pages and delving more into the world Claudia enters would have been really interesting. Perhaps having Claudia’s thoughts confront herself over what she does would have been a moment to grow her character. It also might have allowed for Silvanus to actually seduce her into his clutches in a far more present way than what happens otherwise.

The work is far too short and really that’s the thing that is a real shame. There’s a great deal of story that feels like it’s been left aside for the sake of pushing Claudia to her ultimate end within the story. Perhaps that’s a function of the sad undertones, possibly a decision to keep Silvanus a question mark. I just think there was a lot of story left behind.