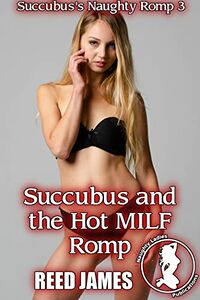 A review of the third work in the Succubus’s Naughty Romp series by Reed James today. The prior works seemed to be following the author’s usual path of harem building storytelling and I wish that there was more than that to be found.

Lust alone leaves something to be desired. Being lost to overwhelming need is really not enough on its own to bring life to characters. Jezebel really needs something to give her more purpose than to be simply a means for sex alone.

Trent is discovering that Jezebel delights in peeking into his desires and making them real. How does one resist a succubus who’s own lust is enflamed by your own desires? One fantasy will lead to another and another, can Trent ever say no?

The work follows on immediately from the prior work with Jezebel pushing all of Trent’s buttons and ensnaring the women around him to fall into their own lusts. She’s still present in the story, but really acts as a trigger for things to happen, though when she is the focus of the story that tends to be where the most heat is.

Much of the erotica is adult movie levels of heat in which Trent has his way with the targets of his lust and then moves on. There is some heat in that, but Jezebel’s temptation over him is a lot hotter and fun to read as she knows what she’s doing to him.

Jezebel however doesn’t grow as a character again, doesn’t reveal more of herself once more, doesn’t give hints of her true nature or anything else. She’s there on the edges, has her moment of lust with Trent and then disappears. I really want there to be more in her character than this, it would really give the story something else to focus on other than the harem aspects which are taking centre stage.

Much like the prior work, the foreplay to the actual sex scenes with Trent is rushed. Jezebel’s enticement of others happens in the blink of an eye. I’d really like more seduction and a bit less sex overall, because the seduction is a lot more captivating than the actual sex much of the time.

Really no character development which remains disappointing. Jezebel is as delightfully seductive and manipulative as she has been, which amuses me. But the story just doesn’t really make as much use of her as it really needs to. She’s a means to an end, but beyond that, what is she doing otherwise? At some point I really would like more story development than sex, there’s a lot that could be done beside the harem building series this is becoming.