Succubi Image of the Week 747

A Review of Capturing the Baron’s Heart by Gwyneira Blythe 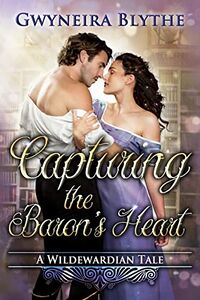 Period pieces of fiction can be very difficult things to consider, write and bring life to. It’s not just a matter of the style, but more of getting the dialogue to fit right. Modern thoughts really shouldn’t be part of the story after all. Still, when it’s done right, and well, the story can be amazing.

But in all of the might be and could be’s, the characters themselves matter most. Giving their story a chance to become all it should be and giving the romance a chance to blossom creates something wonderful.

When a reckless adventurer accidentally wakes Hecate from her Deep Sleep, she follows his trail to Regency Era London where magic and muslin are the fabric of Society. What else is “Kate” to do, but take High Society by storm? Having woken, her duty is clear—she must find a consort before her magic breaks her.
Her consort must be: Magical, Virile, and Immortal.
But the magical world has changed since the Goddess woke from her stone temple. Her witches have been reduced to pawns when they used to rule as queens. Finding her consort proves daunting in this sea of suitors. The long-lived, rich, and titled can be arrogant and tricky. She learned her lesson the first time around. She will not be a blushing maiden; she knows what she wants. Kate’s highly recommended suitors prove ardent but lacking, and it is an unsuitable baron that captures her interest.
Dorian Grey has earned his reputation as the Wandering Baron. Dorian Grey, the Baron of Wendell, is a rakehell of an adventurer for the Wizarding Council in London. The picture of a libertine, he breaks the hearts of maidens and men in equal measure before sauntering off on the next expedition. He’s not interested in being shackled more than he is already. What can a demon possibly offer a goddess, but a single night of reckless passion? His unworthy lust may prove his undoing or bind him in undying true love.
What will it take to capture the Baron’s heart?

Being a Goddess sometimes means hiding oneself away from a world in which there are so very few good souls to encounter. But being awakened to a world in which being a Goddess isn’t what it once was, Kate seeks a means to find the one that is meant for her is a sea of disappointment. Perhaps in Dorian she will discover that an incubus is more than the passion they offer.

Dorian, the incubus of the work, is rather bemusing at times from an emotional aspect. Yes, he’s very much a solitary being much of the work, but there comes a point where realization comes and he changes. It’s in that moment when his true character comes through, and the story finds the connection between the main characters.

Well written, I would have liked a bit more background as to the existence of incubi and succubi in this universe. Still, this is a prequel to the larger series so that might become more of a focus in the later works.

The intrigue really brings out a lot in the characters. The slow creation of the bond between Dorian and Kate is well done and the textures of their personalities mesh well. A bit lost in places; the work is a very well-done interlude to the series which follows. Something lovely and sensual as a story with its ups and downs, but very much a good read.