A Review of Cursed by the Succubus by Cass Griswold 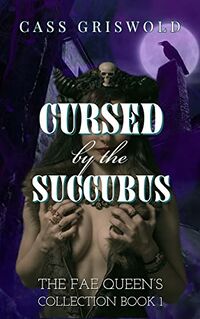 Cursed by the Succubus by Cass Griswold

Succubi are, of course, sexual beings. But it is not just their physical form which makes them so, the mental aspects of their being should not be discounted for they are what truly drives them. Need is a powerful thing, it can drive one to doing unpalatable things or seek to bring about the downfall of others through desire and revenge.

A review then of the first work in the Fae Queen’s Collection in which perhaps one’s anger should never overcome one’s good sense. Or the clear warnings one is given before making a tragic mistake.

The curse couldn’t be real. . . Could it? Per Fae tradition, Queen Maelyrra saved herself for marriage and looked forward to enjoying her new husband intimately. But, trying to survive as a succubus in the chaste culture of the Fae might prove to be fatal for Maelyrra. Under her husband’s watchful eye, she must find a way to survive.

Maelyrra is Queen, but even a queen faces strife and conflict unbidden. Azaersyss used her powers to seduce and take her King in lust. Revenge was expected to be sweet, but a misstep and her own lack of care gives rise to a curse which Maelyrra cannot believe until it is too late. Being a succubus in a world that goes against one’s nature is a curse beyond words.

The work is mainly focused on the mental aspects through which Maelyrra is forced to experience once she is cursed. It’s a telling journey through her own need and the enflaming of passions she struggles against. Her fall is a long and slow battle which she ignores and then grudingly discovers is real. There’s no physical transformations, but the gaining of succubus-like needs is well told throughout.

The succubus at the core of this, Azaersyss, while having a fiery personality, isn’t really described well. She is a temptation, she does bring desires, but is that actually from being a succubus or just being described as one? There are some really well told hints of her form, but it’s fleeting and something of a mystery. Certainly her power and hold over others suggests she is a succubus but no horns or tail does bring questions for the future.

Overall the work is just slightly a succubus story. It’s clearly more involved with telling of Maelyrra dealing with her curse and what that drives her towards. There is need and passion that tells the story well and that was enjoyable. Perhaps the missing piece is what brought Azaersyss to be there and what her real purpose is. That is a mystery worth exploring.

There really isn’t much in the way of an overt appearance of succubi themes so far, but the groundwork is there. Given this is the beginning of the series, there’s a lot of story to tell, many characters are given their place and as such it is intriguing/ Hopefully the next part will bring some telling of why things are and where things need to go.