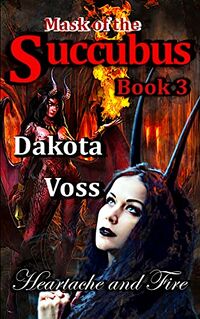 Mask of the Succubus Book 3 by Dakota Voss

A review of the third work in the Mask of the Succubus series by Dakota Voss where there seems to be an unending list of questions to be explored and so very few answers.

The hardest thing to understand is one’s own self. We can hide behind a mask, real or imagined, hopeful to not be revealed. The truth, when we accept it, can mean everything not just to oneself, but the one that matters the most.

Vivian tells herself at first that it is just the mask causing her to feel strange, but after a while the heartache she feels for Elvira is undeniable. She has to see her again. When Elvira is nowhere to be found, Vivian goes through emotional turmoil. She excels at her normal life, but at night she becomes a prowler, staking out the Zamfir house for any signs of life. Elvira does not return. She breaks the rules of the mask and puts it on every night, and each time, morphing into the succubus becomes even more exhilarating. Soon, she begins to wonder if the true mask wasn’t the human face that she was putting on. How long can she sustain this double life? Two months pass by before Vivian catches anyone at the Zamfir house. It is Irena, and she tells Vivian that Elvira was gone and little else. Vivian follows her in secret and discovers strange rituals and teachings of magic going on in the mountains. Elvira is there, and when Vivian sees her partake in an orgy around a bonfire she becomes furious. Vivian stalks her at night and enters her cabin. Vivian is not there just to talk. She unleashes two months of built-up tension on Elvira and shows her once again that the succubus is her true teacher and Domina. The hot lust between the two women is fire and thunder. Elvira tells Vivian that it is not allowed, but rules were not meant to be followed by creatures of the night, and the futa succubus was hungry for Elvira’s submissive flesh.

The world will continue on with or without Vivian, but that’s not what matters to her. Elvira has vanished without a word, there’s a space in Vivian’s soul she’s can’t come to terms with. Need is a powerful thing, it can make one do the impossible. When there’s no other choice but to defy reality for desire, there’s no choice is there?

The story continues on from the last part. being told over an extended period of time which gives the story a chance to tell how Vivian and the mask have changed over time, what that has resulted in, and offers a glimpse that there’s something more to Vivian than anyone really understands.

Vivian’s anger ebbs and flows, there are moments when it consumes her, others where she folds into herself and tries coming to terms with her true feelings. I enjoyed that development, it gave depth to her beyond the mask and anger which really was needed. Vivian is far more than she’s shown so far in the story and getting a glimmer of that aspect of her breathed life into things.

The focus is on Vivian’s search for Elvira, what that leads to, and what she learned from it. This opens a new path for both characters and it’s one that asks a lot of Vivian, the most telling thing pulling her to overcome her anger for something, and someone, far more important.

There’s some revelations about the mask, questions about Vivian herself that I think will be amazing if they are fully explored. Similarly the needs or Elvira, the symbiosis that is growing, it’s wonderful in the need both have.

The erotica focuses on the domination Vivian has over Elvira. It’s a bit over the top, it feels rushed at some points as well. Once past the sheer force of their need, it’s the acceptance of what they have that offered the climax, if not quite the closure, needed.

Overall the story and mythos that is being constructed leaves a lot to be explored. To an extent it is, but there’s something missing. While Elvira’s path is explained somewhat, Vivian’s connections aren’t explored as well as I’d hoped. Perhaps in the next part of the series that will be the focus. I hope it will be.