Succubi Image of the Week 745

A Review of Bratty Succubus and the Sadist Priest: Part 3 by Jess Thick 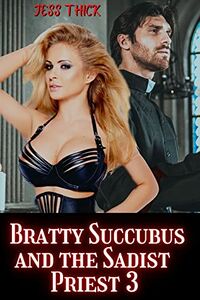 Bratty Succubus and the Sadist Priest: Part 3 by Jess Thick

When a story is told, I really want to see the characters develop. It’s interesting to see them become something different than they began as. What do they learn, do they gain enlightenment or come to find they are less than what they were. It’s a means to hold interest and desire to see what comes next.

In this final installment of the Succubus & Priest series, Felicia serves not Father Augusto but the rest of the monks and priests in training. She’ll use every bit of herself to feed their wanton whims. But will they just make a sloppy mess of her? Or will these inexperienced men trigger her labor?

Felicia gave herself to Augusto in every way. But that isn’t where the story ends. Offered to others for their lust, she finds herself used for their desires and in the end, what she and Augusto want most of all becomes reality.

The erotica was tepid in the heat, there’s’s little emotion and I couldn’t find something that was enjoyable. That’s a matter of taste I realize, but sex alone is not a story and skimming over what should be major parts of the story outside of the sex doesn’t add anything.

Felicia is, and isn’t, a succubus once more. There’s not one real good reason for her to be a succubus in the telling of the story and really only one mention of her form in the entire work. She might as well have been human for all the difference her being a succubus makes to the story. The most disappointing thing is that her character hasn’t changed from the first part of the series and it’s a dearly missing part of the story.

The work is very short again, being focused on the sex scene and not really getting past it towards telling something more. I still think the writing is very good in tone, but there’s just this missing promise in telling more of of both main characters. I’d liked to have known something of what happens when they are seen together. What is the reaction of the town to them. Is there a rival wanting Felicia or Augusto? Some external conflict and story would have made this so much better.

Wouldn’t it have been interesting if Felicia dominated others? Wouldn’t it have been a story to tell of her accidentally corrupting others? As for Augusto, why not have him fall and become an incubus and see where that took things? Something to think about. The hooks are there in the series, the shame is that they were never used.