This is a terrible idea for a costume accessory 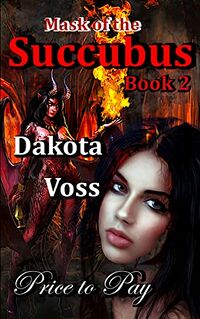 Mask of the Succubus Book 2 by Dakota Voss

A review of the second work in the Mask of the Succubus series by Dakota Voss today in which the story begins to find itself and decide where the real journey begins.

It’s not enough to be desire, to be consumed by it. Without want, desire can be a cold thing. It’s in the discovery of one’s own soul that the reality can be made to what one truly desires.

After her Halloween night escapade of being a futa succubus, Vivian, faces difficulties back in the real world when everyone thinks she has gone off the deep end. Her provocative attire stirred up the entire town into a frenzy. But all of that is no bother compared to Vivian’s real problem. She couldn’t stop thinking about the mask and regrets returning it. When mysterious Elvira finally shows up and tells Vivian that her mom, Irena, wants to have a word with her, things take a turn for the unexpected. Irena gives Vivian a proposal that would allow her to win back the mask, forever. But there was a price to pay. Elvira had a secret fantasy that Irena knew about. Vivian was to make that fantasy come true on the night of her birthday. She was to don the succubus mask and take innocent Elvira in the night. Vivian agreed, but she was unprepared for how enticing Elvira would be. She hadn’t expected to be so drawn to her. Elvira’s luscious body awakened the fires of lust within her, and by the end of the night, the two will have surprised each other in more ways than one.

The day after Halloween brings Vivian a lot of grief for what the mask allowed her to do. But with that problem comes a larger one and Vivian can’t avoid facing her choice and what comes from the true harm she has done.

The work continues immediately after the prior work, mainly focusing on what everyone around Vivian thinks of her actions under the power of the mask through much of the work. It’s when she is confronted by Elvira, who gave her the mask, where things begin to move from the erotica of the prior work towards Vivian’s character beginning to evolve towards something more than the angry person she otherwise is.

The one thing that I think needs to be toned down or at least needs somehow to be passed through, is Vivian’s anger. It just feels like that’s far too powerful in the story. Taking that away might give something more for her to grow into and that seems to appear on occasion when she realizes just how upset Elvira is and what trouble she’s gotten into.

It’s a bit scattered in those moments, the anger still comes through, which makes it very difficult for Vivian to find compassion. I’d have liked more of that overall as I think that would help to progress the story and the relationships.

There comes a point where the mask returns the story, Vivian is given a choice by Elvira’s mother, who, as an aside would make for a wonderfully seductive succubus, though she seems not to be. The choice really isn’t much of one, the temptation of the mask takes hold of Vivian and from there the story sets itself onto an interesting path.

There’s a bit more in the transformation, which is interesting as there’s a question as to what the mask truly is. I liked that aspect of things as it gave something more to the story. Vivian’s succubus form is more wild now, seeing to be more concerned with domination, control and expresses a kind of animal need which is quite different from her first experience with the mask. That worked well, there’s a feeling that things are slipping out of control which brings a dangerous aspect to what follows.

The erotica between Vivian and Elvira however didn’t quite work for me. Once again the anger within Vivian seems to take over things and while that works in the context of the scene, which has a very strong D/s aspect to it, it sort of tripped over itself. A bit too rushed, a little too scattered. But there’s a lot to work with to give more to the relationship that is building, which is very promising.

There’s still a lot of promise here, both in the characters and the mythos that’s being constructed. I hope that Vivian’s anger turns towards something positive emotionally and otherwise as it feels like that’s the missing part of things overall.