Succubi Image of the Week 744

A Review of My Darling Demon by Sherry Stone 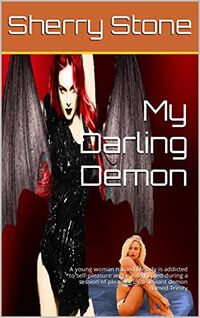 My Darling Demon by Sherry Stone

Within the telling of a story, beyond the erotica, past the monologuing, there’s a point where the tone matters. It’s very difficult to place heat where the storytelling doesn’t give rise to it being possible, or really adding to the story or the characters themselves.

Passion is more than the words themselves. Need is more than just vaguely asking for it to be. A story should draw the reader to becoming captivated in the story and invested in the characters too.

Melody is at home in the middle of her obsessive afternoon ritual of self-pleasure when all kinds of strange and scary things begin to happen. Glass breaking, poundings on the door, strange voices talking to her. All done to get the young girl’s attention so a lusty hybrid of succubus and incubus can indulge herself in the pleasures of the frightened girl’s body.
Anxious for the demon to leave so she can get back to her personal obsession she agrees to let the demon have her way with her. On the stipulation, she does no further damage to her house. The demon readily agrees to the request and provides Melody the most sensational lovemaking she had ever had, alone or with someone else. Thus began the beginning of a very symbiotic relationship between the two.
Melody and Trinity have over time adjusted to and normalized their bizarre relationship and are at a point where they can engage socially and celebrate their love outside the confines of Melody’s home. On a whim, Trinity decides to surprise her human lover with a weekend of endless bliss and other jaded sexual endeavors at a luxury resort. The resort will never be the same.

Melody is being haunted by her own desires and needs. A moment of frustration brings Trinity into reality and with her comes the wanton desire that Melody craves. But a succubus has needs as well and when those needs become entwined, their desires might not be enough for them both.

Trinity, who is described as being both succubus and incubus in nature, doesn’t evolve as much as I’d have liked her to. Her form, desires and drive aren’t expanded on very much. The sex scenes tend to take over most of her parts of the story and that left I think a lot of storytelling behind.

The work needs some editing to bring life and emotion to the dialogue. There’s a need to get past the sex scenes and tell of character growth. Most of all, the overall tone of the storytelling could use passion because there’s just not that sense of desire and need overall. Giving rise to something more than telling what happens and more of teasing the reader’s imagination would make this so much better.

The singular problem isn’t the characters themselves, but really it’s the oddities of the dialogue, the flat tone which comes out in the emotion when there needs to be something more. There’s an interesting story here, but the heat just doesn’t make things work as well as I’d hoped.