A Review of Succubusiness Part One: Crash and Burn by Jacky Dienda 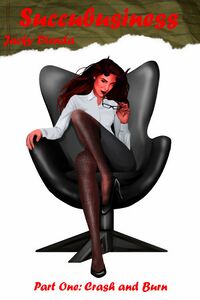 Not all stories abut succubi need be tense action packed works. Nor do they have to be all about the sex and nothing more. The best stories are those that bring the characters to life, that offer a work that’s interesting, and a situation in which the characters are brought to be more than they were at the beginning.

A review then of the first work in the Succubusiness series by Jacky Dienda which holds one important thing. Anusing the Queen of the Succubi is a good thing, and having a succubus who is more than capable of twisting hell around her little finger is nothing but fun.

Ashley used to have it all. She was 28, a career woman, and a high-powered executive assistant to the chief executives of a Fortune 500 multinational shipping company. Things for her were going pretty great. But shortly after she dozed off mid flight, her chartered jet went down in the South China Sea, and when Ashley woke up, she was in Hell. Now Ashley is dead and loving it. Recruited by the archdemon Azazel to be his Sexcretary, (not a spelling error) Ashley is damned to spend eternity helping manage the Succubusiness- Hell’s transdimensional call girl department that sends lust demons to Earth to satisfy the dark desires of kinky cultists.
Back when she was alive, Ashley would have resented being fetishized as a sexy secretary. But as a succubus, she can’t live without sex… And her boss is a devilishly handsome hot older man… And he’s really good in bed.
Now Ashley is getting laid better than she ever did when she was alive. Now this hard-working straight A mousy nerd girl is going to spend the rest of eternity making up for the lost time she never spent exploring her sexuality, and she even gets her own fancy desk! So light your candles, dust off your Oiuja board, and skip church on Sunday, and get ready for an afterlife full of dad-joking demons, tongue-in-cheek takes on religion, and filthy fornications, because blasphemy is the best fetish fuel for all your dirty desires in the Succubusiness!

Ashley made a name for herself, working hard to get ahead in business. But the universe has it’s own plans and a bit of misfortune drags her to hell. But the corporate world in Hell is very much like that of the mortal world. Except for the small issue of Ashley becoming a succubus. But the one with the issue might be her new boss in hell and hell itself might have something to worry about too.

The work is a humour laced journey that delights on every page. Yes there is erotica, but overall it’s adding spice to Ashley’s personality and everything she does to deal with her situation. Lots of jokes, sexual innuendo, and a growing acceptance of the situation that mixes with Ashley’s own forceful personality and drive. It all just pushes the story in unexpected directions which delighted me.

Ashley is not a stereotypical succubus for the most part. She is very much in disbelief and trying to come to terms with things for the most part of the story. But there comes a point where she’s made to accept she is a succubus and then things turn in an inspired way.

It’s not that Ashley changes who she is, she redirects her drive and personality into being the best she can be in her new role. That brings about some realizations for her. It gives a hint of some dominance in her character that I really liked. Most of all, it keeps her from being turned into a sex toy alone and that is a very dangerous thing for her new boss to be dealing with.

The erotica runs with some lovely heat, the moments aren’t over the top and I liked that the feeling of control shifted back and forth which gave the story room to play with and Ashley’s personality to really comes out and grow in the new reality she has.

It is a bit short however. I feel like another five or six pages to expand on Ashley’s turn of attitude would have been interesting. There are a few minor editing issues here and there but they don’t take anything away from the story overall.

I like the world building, it’s not dumped into the story and it does add a lot of flavour and possible directions for the series to take. If there’s one thing that I really would like to see, it would be Ashley having to deal with other succubi. Somehow I think that will be an encounter that will bemuse me.

It’s over the top, perhaps a bit silly and self-aware. There are moments when the dialogue just makes me roll my eyes… and I simply adore every single word. Tremendously fun, I think the series going forward has a lot to offer. I hope the next part won’t be too long appearing, Ashley is just bemusing and that’s really a good thing.