A Review of Bratty Succubus and the Sadist Priest: Part 2 by Jess Thick 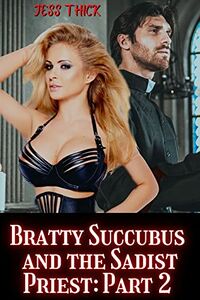 Bratty Succubus and the Sadist Priest: Part 2 by Jess Thick

In telling a story there comes a point where the erotica alone isn’t enough to hold interest or make the story intriguing. Sex alone, or a fetish for that matter, can’t give a story life.

A review then of the second work in the Bratty Succubus and the Sadist Priest series by Jess Thick in which the characters exist, but don’t really become more than paper-thin in the storytelling.

Pregnant and the secret pride of a priest, Felicia can’t help but tempt! Can Father Augusto’s punishment correct her bratty ways? Or will this bratty succubus enjoy using holy tools in such blasphemous ways?

Felicia has found herself at the mercy of Augusto’s wrath and lusts for her. Her need for him and his own lusts have trapped them both, falling into a spiral from which neither can escape. Or do they really want to?

The erotica remains porn-like, there’s really no story told otherwise which is a real shame. It felt too rote, too similar to the prior work as well. There’s no passion in the telling, the character’s actions felt like they were scripted as there was no emotion in the words spoken.

Felicia, while she is a succubus, really isn’t one. Yes her wings and features are described, but there’s nothing in her actions or character that says she is a succubus. Overall it seems like she didn’t have to be a succubus and the story would be little changed. Her character doesn’t change from the first part of the series, there’s no growth for her and that’s something that the work could use to make it better.

Some internal monologue beyond her reaction to being used would go a long way to making the story better. Similarly Augusto has a wall around his character that doesn’t give a way tp see him more the the superficial personality he seems to be.

The work is very short, being a scene between the two characters with nothing beyond the sex told. It wouldn’t be padding to add in something about what both characters do outside of the sex. Really that would be interesting as there are hints. but no experience of what Felicia deals with every day. She is a succubus, so tell that story as well. If nothing else it would make things a lot more interesting than they are.

The writing continues to have an interesting style in the storytelling, but once more the focus on beings concerned with sex alone leaves too much unsaid.