A Review of Cursed By The Succubus by Nelia Noche 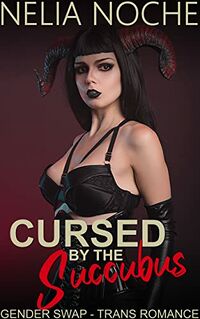 Cursed By The Succubus by Nelia Noche

In the telling of a succubus story, sometimes there’s something missing. The main character tells their story, but when they encounter the succubus, there’s a seeming lack of background to them much of the time.

Adding depth to characters matters, whether minor or main, and when that doesn’t quite come through it leaves a gap in the story telling. It’s that missing piece of the puzzle that can leave the reader wondering when the tale is done.

Jade finds herself exhausted every morning since she moved in the new house. A mysterious box brings Jade in the presence of a long dormant creature: A Succubus. The latter placed a hung curse on the young woman. Damned to navigate this world with her new ‘gift’, Jade will only understand its true power as she inches closer to fulfill the ultimatum given by the mysterious horned creature.

Jade has decided she wants to follow a new path in her life. A change of scenery brings a mysterious box to her. It contains a mystery and a gift, but the question becomes whether she wants the gift and if she can live with it. Some gifts come with a price and others come with a promise.

The work mixes a succubus story with a gender transformation theme and a mystery to unfold. It’s interesting in the reveal of the succubus and the transformation of Jade and what that does to her and for her. It does feel rushed within each scene and some of the moments are quirky and odd, but that’s mainly to Jade trying to come to terms with what’s happened.

The succubus of the work, Qarinah, is somewhat on the edges of the story for the most part. She’s present, drives Jade towards something she desires and presses on Jade throughout. But in the telling of things, Qarinah is somewhat hesitant in her words, lost in her needs and doesn’t quite reveal why things came to be until the very end of the work.

This does work in the setting of the story, both main characters feel lost in their own ways. It’s just odd how Qarinah and Jade’s needs become intertwined, neither of them being able to clearly express themselves until the last moment.

The work has depth, the intermixed scenes have their moments. The erotica leaves a bit to be desired overall. There’s heat, but little passion. There’s desire, but it’s more animalistic than emotional in tone. The work could use another editing pass, there are some points where the story reads rough around the edges, some words are not the right ones. The dialogue could use more emotion at times as well to give more heat to the story and express how mentally draining and taxing the experience is to Jade herself.

It’s a bit rushed and scattered in the storytelling, jumping from scene to scene which feels a little odd. More time spent on telling Qarinah’s story would have been good, expanding on the why of things is needed. The ending leaves something to be desired, it’s a bit too abrupt but does leave a path to telling more of the story. Perhaps the author will, there’s plenty of story to build on.