A Review of Feral Hearts by Molly Ellis 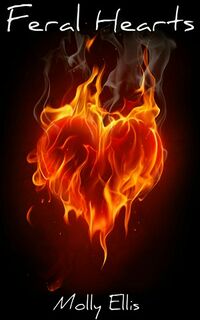 Something that I wonder about when succubi appear in stories as minor characters is why, exactly, they are there. If it’s just for a flash of sex and nothing more, that’s really not anything that interests me.

It’s somewhat more of a question when they appear, have a little bit of a backstory mentioned in passing and then seem to be wedged into a story which might not really need them. Or, perhaps more concerning, their reason for being part of the story seems a bit too trite.

Feral Hearts is a story where a young superstitious woman finds herself bitten by a werewolf. She falls hopelessly in love with one of the men that saved her. She soon changes and finds love with another creature like herself by whom she conceives. But the bliss is short lived as she turns again and finds that she yearns for her former lover.
In the wake of her departure from his life, her former lover does his best to move on. He falls for the lure of an attractive succubus, but quickly recovers from his temporary error in judgment and breaks her heart. She vows to have him regardless…

Somewhere the myths and legends are real. Werewolves are fact, other creatures do exist and they all have their needs, wants and desires. But nothing can overcome two souls fated to be with each other, no matter the cost to be paid.

The story is mainly focused on a werewolf transformation with a bit of erotica around the edges and a lot of teenage angst and desire. The transformation aspects are well done, the characters deal with their emotions and all that comes with the knowledge that the reality of the situation brings with it.

There is a succubus named Molly that appears here and there in the story, but she’s barely a succubus, more a temptation to one of the main characters. Overall she’s very two dimensional in her focus and while perhaps not evil, she is unlikable in her thoughts and what choices she makes.

The odd thing is that the reader is dropped into the work and there’s an immediate sense that this is a larger story universe which is barely touched on. There are hints of a lot of things going on in the background, but there’s no real depth to any of the hints given.

The work drifts a bit in the writing, passing from one moment to another, time passing oddly between each. There’s a rush within the scenes themselves, not a lot of time being spent in developing the characters beyond the moment they are in. A lot of that has to do with the length of the work, it is I think far too short for the themes and characters to be developed as far as they might have otherwise been.

Molly appears to be a succubus, but she’s tangentially part of the work. As such this isn’t a succubus focused work, which does make sense with the overall theme. It’s too short, a glimpse of something interesting however which, like other works by this author, should be expanded on to make something more of what is here.