Succubi Image of the Week 739

A Review of The Elusive Serial Seductress by Molly Ellis 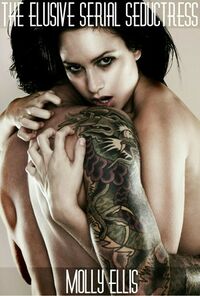 The telling of a story in a good way depends on a hook to capture the reader’s attention to begin. But that alone isn’t enough to make a story memorable. Secrets of the characters, the setting, what happens in the encounters, these are things that drive the story onwards.

It’s very difficult to give a story the chance to breathe, to explore the characters and tell that story when the work is so disappointingly short. A review then of a work which has so much to offer, but just is far too short.

Detective Graham is in pursuit of one of the world’s most alluring creatures. Calista was a raven-haired, curvaceous succubus, capable of bewitching men with a glance. Her touch could kill… and she’d killed many. Cast out by the Tribunal that governs her kind, she has left a trail of broken hearts, twisted minds and shattered souls in her wake over the course of centuries. But to elude authorities, she’d taken to extracting only that which she most needed from her virile victims: vital attributes that prolonged her life and bolstered her prowess.
Calista uses up man after man, always wishing she could find just one to give her everything she needs… and put a stop to her endless searching. In the meantime, she slakes her hunger, but when one of Calista’s latest victims goes on an insane rampage, driven mad by her cruel absence, his crimes call attention to her… and Calista risks being caught. For a woman who is so much more than flesh and blood, imprisonment is worse than death. She’ll stop at nothing to remain free.
Inspiring lust and longing wherever she appears; the hunt is on for the seductress. Will Graham be able to remember his mission to catch her or will he become as unfortunate as the others?

Not all encounters with ladies of the night turn out well, and for one detective there’s a woman out there that is a killer in many ways. She’s seductive, irresistible and none she js attracted to will escape her. Not all monsters are obvious, and some have been around for a very long time.

The story is interesting as it begins as a murder mystery but quickly shifts into the telling of a succubus story in a rather oblique way. That’s not a bad thing, and really the way Calista, the succubus of the work, comes into focus is done exceptionally well. The erotica has some spice, the mystery unfolded in well thought out way. It’s overall a very enjoyable read and has a lot going for it.

Calista, who is clearly a succubus, an evil one, and is very well aware of her needs is delightful. Her seductiveness is told well, her powers over others in the story are described delightfully. I thought that her internal monologue offered a lot about her too.

Where things needed more expansion was all of the hints that Calista gives out in the story. There’s a lot of background that’s dropped along the way, but isn’t detailed or built on. The push towards the ending takes over the story which was a shame. I enjoy stories in which the succubus character tells of their past, how they come to be where they are and that didn’t happen much.

The work is very short which leads into this issue. There’s a good deal of time spent with the main character seeking out Calista which then moves into their encounter and beyond. In the middle of this comes surprises that aren’t taken far, but offer that there’s more going on than Calista herself. But they just aren’t explored.

Written well, the characters are very strong in their voices, the story is told well, if rushed a bit at points. The main issue is that it’s far too short with far too many really good ideas not explored. It’s a shame that the story is so short, that the background of Calista isn’t explored more than it is. There’s a lot to like here, it’s well written and the story is very intriguing.

Well worth a read, the characters, especially Calista are wonderful. I think the author really should consider taking this story and expanding on it. Perhaps there will be a follow on, perhaps this will become a larger story on its own. There’s so much character and story to build on that it would be a real shame if that doesn’t happen.