There’s more than one problem with these horns

A Review of Don’t Fall in Love With an Incubus! by Lee Kaye 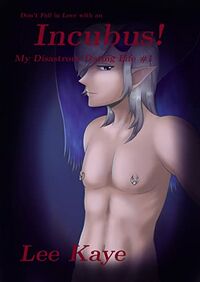 Don’t Fall in Love With an Incubus! by Lee Kaye

In telling a story, the focus can be on the story, the setting or the characters to a larger or lesser extent. Sometimes it’s not so much the story as a whole than it is the first encounter between characters that leaves the best impression.

Where that takes the story, and how it gets to the climax does matter.

As a two-hundred year-old elf, Elfira should know better than to keep falling for monsters! But when she meets an enchantingly beautiful young man in a tavern and invites him back to her room, nothing can go wrong… can it?

Elfira is an elf who is wise to the world around him, for the most part. But sometimes one can’t see past the desires within or the attraction that awaits them. Not all encounters with incubi are bad and perhaps Aeron can convince him of that.

Aeron, the incubus of the work, is delightful in both his human and incubus forms and the storytelling waves the effects he has on Elfira really well. It’s not a rush to the erotica, there is a good deal of time spent in exploring both character’s needs which was a refreshing surprise.

But i’s far too short, which is a real shame. I adore Elfira and Aeron is just a lot of fun as an incubus. But the story rushes to the erotica a bit quicker than I’d like it to have. That said, it would be delightful to see a follow on work and where things might or might not go beyond this encounter. It’s a good start to a series as the book listing indicates and perhaps that will come.

A well told work of m/m erotica that is a bit different but does not lose the sensuality of the elven and incubus forms. It’s a shame that it is short in length and the ending is a bit abrupt which is the larger shame all things considered. Nonetheless, a delightful read.