A Review of Last Resort by Vivica Webb 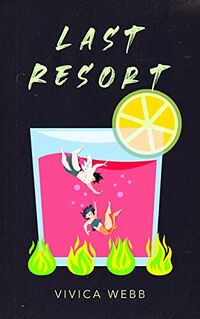 It’s one thing to tell a story in which the progression of the main character leads towards some kind of understanding and if not that, a resolution of their story.

What I think doesn’t quite work is rushing through the storytelling to get to the erotica and then not really developing the story and characters to a point where they become more memorable.

You could accurately describe Camelia Wilde’s day as a “complete and utter trash fire.” Luckily, she runs into a travel agency on her way home, which is odd since she doesn’t recall seeing it before. An island getaway should distract her from her miserable life, but the tropical resort turns out to be positively hellish. An entire array of beautiful and sinister creatures await her, alluring as they are frightening. She runs into lovable brutes, charming fiends, and a seemingly outcast fallen angel. Cam has to understand why these devils have ignited such desire, set her imagination ablaze, and if she even wants to go back to the everyday.

Camilla isn’t having the best of days. If it isn’t losing her job, it’s her ex being a pain. A suggestion to visit a resort seems odd, but she decides to go and see what happens. But not all is as she expected and her personal demons may be facing real ones too.

The work is something of a journey of self-exploration that rushes from moment to moment in order to get to the clusters of hot flashes which make up the erotica. It’s a bit tangential in the storytelling, a bit confused more than once in what happens to the main character as well. While these are bothersome aspects of the story, there are some interesting questions being asked along the way as well.

There are various characters described as succubi and incubi, but they are minor characters and really exist to provide a temptation at one point and a bit of heat in another part of the story. They aren’t exactly evil as such in the story, but they have a purpose and need which seduces the main character between her encounters with the male leader character and others.

The story is interesting, but feels too rushed and scattered at times. The characters have their moments, but really none of them were that intriguing overall. The ending is a bit disappointing and abrupt which doesn’t do a lot to make the story come to a satisfying close. It could be a lot more given the time to grow the story and the characters, but it really didn’t do enough. There’s just so much happening and so many threads being started and then intertwined before coming to an abrupt stop that it took away from the story and it shouldn’t have.