Succubi Image of the Week 738

A Review of Revenge on the Sleeping Succubus by Alexander Wonderland 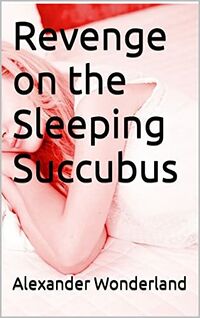 Revenge on the Sleeping Succubus by Alexander Wonderland

Sometimes a story idea doesn’t get very far in the telling. IT’s a shame when the idea seems like a good one, there’s something to build on and then there’s really nothing in the story itself.

Scattered thoughts don’t always connect into telling a story well and when that story doesn’t give much other than a tepid moment of erotica wrapped in thin narration, it doesn’t do much for the idea or the characters themselves.

Ebarin the wizard loses his life force to a succubus and ends up with the body of an old man. In order to regain his youthful body he finds the succubus during the daytime, when demons are asleep and vulnerable.

Ebarin fell to the powers of a succubus, she taking what he had and leaving him frail. But revenge is a powerful thing to drive oneself onwards. Finding the succubus, he intends to reclaim what she took in the same way she did from him.

The work is very short, what I tend to call a pamphlet in length, as such there’s really very little storytelling, even less in the way of heat in the erotica as well. It’s an idea, something of a handful of scenes pasted together rather roughly.

The writing is very scattered and the work really needs another editing pass to make the story read better than it does. Beyond that, the characters are both very two-dimensional and not that investing overall.

The work is very short and while the idea is interesting, there’s no real story or character development. It’s not that much of a hot flash, it’s not that much of a succubus story either. The author might be well served to take what they have and expand on it. There’s a good story here at the core, it’s just not being told.

It’s really a story with a bland sex scene and a bit of a dominance theme. There is a succubus, but she’s not really in the story so much as being part of the scenery. This could have been something, the author just didn’t take the idea and make something of it.