The name says it all really…

A Review of Until Depletion by Kristofer Burns 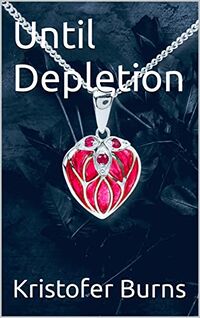 Until Depletion by Kristofer Burns

In the telling of succubi stories that are on the dark side, there is always someone that loses and someone that survives. It’s sometimes difficult to tell the two apart, to see who the characters are and why they do the things they do.

Evil alone isn’t a good enough reason sometimes for being so. Many times the part of the story doesn’t get told and it makes me wonder.

Sex, Magic, and The Secrets We That Make Exposes Our Shadow Self. A recovering addict falls in lust with a lady succubus from an ancient tribe. Unknowing of her true intentions, will his energy become depleted, or saved by a secret admirer.

Life can be mysterious. It offers questions, ideas and directions to take one’s soul. But there are other beings in the universe that have their own needs. It is when you become their focus that one gives up, cannot resist, or finds that they never had a choice in the beginning.

The work is something between a mystery and horror story overall. It’s mainly focused on developing the characters, telling the story, and bringing many questions about all of the characters to the end. It’s not really a work of erotica, though some of the motions and seductions of the succubus of the work, Eshe, border on interesting imagery. The story is a slow burn, taking quite some time to connect the characters, draw them into Eshe’s orbit and then begin all of their falls.

Eshe isn’t quite a succubus, though she has many of the aspects of one. She’s more a force of evil need that seeks out those that can sustain her. Again, there are some seductive moments, but she strikes me as being quite cold, which is part of her appeal as an evil character. However it’s difficult to really care about her, which is the point in the end. Still, she’s mainly a hovering presence in the story and it might have been interesting to see more of her past and reasons for what she does.

The work needs another editing pass in a few places, most notably in the dialogue. It reads at times flat when it should have passion and anger. Beyond that, there are a few points where the storytelling gets a bit lost and could use some editing to bring things into focus more.

It’s a very dark story, there’s really not that much light or hope to be found. That’s a function of the storytelling as a whole which works well overall. The work ends in a place that suggests there is a story to follow and I’d hope for that story to tell more of Eshe and her kind. The part of this story that’s missing for me is understanding Eshe, how she came to be where she is. The hints are there, and there are a lot of those. We’ll see if something more follows.