Succubi Image of the Week 736 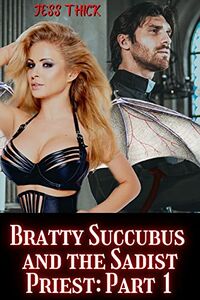 Bratty Succubus and the Sadist Priest – Part I by Jess Thick

Succubi are, of course, temptresses because of their nature. But that also works the other way around when they are tempted by their own desires. The thing is, temptation without explanation can be less than interesting.

Felicia never expected to wake up a succubus! Her dreams of being a nun are ruined, but the priest whose silver tongue inspired her dedication is the one she wants to embrace her. However, no matter how bratty this demon is, the silver fox of a priest just won’t budge! What will it take for her to get him to be her first? And once he has had her, will he ever let her go?

Felicia has been desired by all around her since her true nature of being a succubus has come to the fore. But she has dreams and desires of her own and perhaps there’s a soul that can bring them to heel along with herself. One cannot refuse one’s own nature, they being succubus or human after all.

But at a certain point the erotica turned more porn-like. Again that worked, for the most part, but it just went a bit too far and a bit too harsh for my liking as the domination theme appeared. Still, the reveals worked well, even if there are points when the dialogue was a bit much and took me out of the story.

Felicia I think is very interesting as a succubus character. She wears her needs on her sleeve, her description is quite telling and I liked her internal monologue throughout the work. What’s more telling, and really the story didn’t get into this, is her background and what her hopes were before she became a succubus. I’d really would have liked the series to start with more of a building up of her relationship, how things came to be where they are. That’s a missing part of the story and it’s a shame that didn’t happen.

The work is far too short as a result, this being more of an encounter than anything else. There are a lot of hints about what Felicia has been through and what is going on around her. But it doesn’t get as much time as it should. I especially would have liked to know more about her finding ways to sate her hunger that were suggested in passing. That’s an aspect of a succubus character that isn’t told often and it should be.

The work could use another editing pass to expand the characters into something more than the beings concerned with sex than they are. Otherwise the writing is good, but things move too quickly which leaves too much unsaid.

Overall the problem is the erotica was too pornish and over the top. That’s not to say it doesn’t work however. There could have been a lot more time spent in telling more about Felicia, her past, the things she’s been through. There could have been more told about the focus of her desire, but there wasn’t. Most of all getting past the infatuation she has and explaining why things are is needed. Still, this is the first work in the series and perhaps the next work will be telling more about the characters. That would keep my interest overall and make the work a far better read than the hot flash it is.