This cannot be called a pitchfork

A Review of What Fresh Hell Is This?! by Nick James 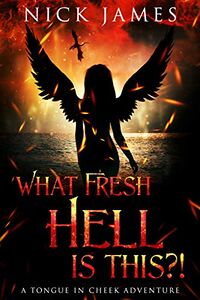 What Fresh Hell Is This?! by Nick James

While that in itself isn’t the be all and end all, it matters if they are paper-thin in who they are.

Kharon, the Boatman of hell, has been doing his job since the dawn of time and he is tired. As a demon he had always been feared by the Souls as he ferried them to their afterlives. But not now.
The world has changed and the mortal souls he now encounters are self-entitled jerks. Instead of cowering and asking why they are in hell, they argue and demand to see his manager, or a lawyer. This human behaviour alone has Kharon dreaming of retirement; leaving his boatman role to be carried on by his last living heir.
In the mortal realm, Chad is your typical twenty something young man who spends his days flirting with bikini clad women as he rents out jet skis. In the evening he immerses himself in drink and partying. But then in the blink of an eye this young man is dragged into the pits of hell to repay his family’s debt to Kharon. He must exchange lazy days in the sun for transporting souls through the nine circles of hell.
How will Chad cope being surrounded by angry souls and demons whose only desire is to taunt him? Can he successfully continue the legacy? Does he want to?
Oh, and everyone gives the same advice: don’t touch the Demon girls!

A deal is a deal, and when Kharon, the Boatman of Hell is involved, there’s little choice given. Still, while he has a deal, the one that has to make good isn’t worth much. But perhaps Chad can get past himself and perhaps there’s something waiting for them both.

There are a number of succubi characters that appear, but they are mostly in the background or are used for some sexual innuendo before the story moves onwards. It’s a shame really as many, like Lilith, could have added more to the work than they do. Much like the main characters, they are in the story, but not really part of the story.

The erotica is generally over the top and very much adult movie levels of heat. It does work with the work as a whole considering the wooden dialogue much of the time and the oddities of the character personalities.

The work feels scattered and missing focus a lot of the time. It’s difficult to care about Chad, or Kharon for that matter as neither is really that interesting. Similarly most of the characters are two-dimensional in their being which makes remaining engaged difficult. The dialogue is somewhat odd as is the narration and perhaps another editing pass might have tightened things up a bit.

It’s not a succubus focused story, and that’s expected here. It is disappointing that the succubi didn’t have the depth to their characters that I’d have liked. There are some moments that I thought were well done, but overall it just wasn’t all that appealing to me at least.