Succubi Image of the Week 734

A Review of Succubus Sisterhood: Part One by Nick Storming 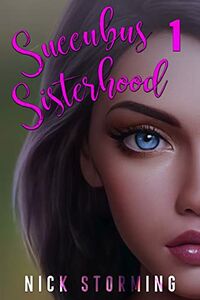 There are quite a number of harem stories of late involving succubi, but they tend to be very stereotypical in how things are told.

Finding a different aspect of the mythos gives a change in story and characters that can make a story work well, or make one wonder why the idea isn’t explored more.

For two thousand years, the women of Succubati, and those of other barbarian villages on the fringes of Empire have languished under a terrible Roman curse. Locked into immortality and forced to feed off the essence of powerful men, they await the man who will free them from the curse and return them to mortal lives. The Incubus.
Byrce is clueless about the true nature of the woman of the house, and his stepsisters. All he knows is that their strange rules are making his life hell. From cooking all their meals, to licking all the stamps, and refusing to touch him, even for a hug. But all of that is about to change. Can Bryce heal the Succubi as well as break their curse? Or will he let their broken minds and his own baser urges drive him to gluttonous indulgence?

Bryce knows there’s something odd about his family but he can’t quite figure it out. Coming of age, and the changes in his relationships, reveals that he has a larger purpose than going to college. He needs to save a multitude of succubi from their curse.

The work is focused on a harem storyline with succubus characters who are related to the main character Bryce. It’s a bit scattered at times in the storytelling, there are moments when the erotica leaves something to be desired. But past that comes a lot of charcater development and world building that really interested me. The mythos of the succubi is very unique, the explanation of what incubi are is different, and thought provoking, which was enjoyable.

The erotica read a bit tepid, missing focus at times. There are two scenes which are, however, extremely well done. As well much of the teasing that Bryce goes through is delightfully fun to read. There’s a lot to enjoy in the story that the erotica doesn’t really add much to. Still, getting into the core of the story, seeing how the relationships are revealed, the secrets brought to the fore, and what Bryce really means to his family leaves much to consider.

The work needs another editing pass, mainly for the dialogue which lacks the emotion it needs many times. I’d have also liked more about his family as family and not so much being succubi seeking him out for sex. It just seems to leave the story missing a part of itself and it’s a shame all things considered.

It’s certainly a unique story, the twists are not quite what I’d expected overall. It does need another editing pass however. That said, there’s a lot invested in the characters and the mythos which I hope will lead to something better than a stereotypical harem story which at this point seems to be the point of things.

As this is the first of two works, I’d hope that the next is less about the sex and more about the need each character has. It’s a story that needs to be told and I think there’s promise that it will be.