A Review of Succubus Freed by Elle Damiana 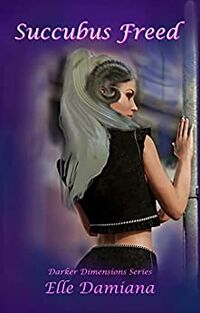 A review today of the first work in the Darker Dimension series today in which I find the main character to be delightfully fun, interesting, and most of all, has a personality that just makes me smile.

There’s nothing good about a succubus being bored, it can only lead to moments of them amusing themselves or taking out their frustrations on the universe around them. Either way, someone’s going to be having an interesting time of things.

Tarathoth has seen everything and done everybody. But even succubi can have an existential crisis. After eons of pleasuring nameless men and monsters, will a tall, muscular gardener named Marcus finally take her places she’s never been before?

Tarathoth is bored. Taunting the damned, being sexy and seductive, and even sex itself just seems like she’s going through the motions of being a succubus. A slightly messed up summoning leads to encountering someone that might make everything worthwhile. Even if she has to fight tooth and nail for them.

The work is a wonderfully told story with humour, attitude and a sense of self-awareness that I found delightfully fun. The main characters Tarathoth and Marcus fit together perfectly, their personalities mershing in just the right way. The plot is interesting, the development of Tarathoth from who she was into what she becomes through the passions shared with Marcus is just amazing.

Tarathoth is so very much self-aware in the work, there’s a certain mischievousness and personality that really appealed to me in her. While she is, at least physically, very much an evil creature of temptation, there’s a point where she comes to realize she can be something more, have something better and that makes her personality turn a corner and the story sings. She has a need to be more than she is and that’s such a driving force so when Marcus appears, and he’s everything Tarathoth needs and desires, the joy is real and amazing in both of them.

The ending of the work is both satisfying and as well opens the path towards the next part of the series. It’s a bit abrupt and could have had a bit more depth, but it sets the story and Tarathoth’s future well. I wish there had been more about Tarathoth herself, her world and overall, when Marcus reveals himself, it might have been nice to tell something of just how he got there and why he’s so attracted to her.

I really like Tarathoth a lot, she reminds me of a certain Queen of the Realm in a lot of ways, which amused me. I hope the series takes her from her devilish beginnings towards something better, there’s hints of that and the ending gives me some hope for her future. Perhaps most of all, Tarathoth has a reason for living and it’s going to mean everything going forwards.