What Matters by TeraS

A Review of A Witch’s Folly by Vicki Gallus 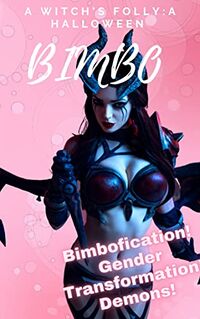 A Witch’s Folly by Vicki Gallus

The stories in which the adage be careful what you wish for appears can take some interesting turns when a succubus or incubus is involved.

Sometimes it’s not so much the entrapment in the beginning that matters than it is about the falling to one’s own desires that is far more telling.

Darren’s wife is a witch. Their life is one of suburban ordinariness until one day, a demon summoning goes awry. Faced with the unimaginable sexual desire of the denizen of hell, Darren and Lydia are no match. They will transform, change and submit to their demon mistress.
Darren and Lydia’s deepest desires will be fulfilled as they transform into voluptous, ditzy bimbos.

Darren loves his wife Lydia and is delighted in her abilities as a witch. But on Halloween her powers are at their best and when she decides to summon a demoness, things don’t go quite as she expected. A misspoken wish leads to unexpected changes and transformations for them both and a future neither of them expected.

The work mainly focuses on a bimbo transformation driven by the succubus of the story. It’s very much a case of the main characters making an ill worded wish and how that makes things unravel. There’s really no feeling of the story being dragged out or mistepping, each scene works well with the next and the result is a surprisingly well told succubus domination story that I enjoyed.

Andriel, the succubus of the work, is quite the manipulative creature, using her powers of suggestion and seduction to capture the souls of both main characters and turn them into what she wants them to be. There’s an interesting moment for her character as well that was a bit unexpected but fit the story well in the transformation and entrapment of the main characters.

The erotica is a slow burn from beginning to end, really never becoming something unique, much of the transformation aspects of the story focus on the bimbofication of the main characters. That is done really well, especially in how Andriel uses their own desires and hidden wants and needs. The transformations themselves are really well done, along with the hints of mind control and that adds heat to the story.

The work ended in a way that felt a bit disappointing. It feels like there needs to be another chapter or two at least if not a follow on story. Actually that would be a really good idea as the transformed main characters are in situations of peril that I’d like to see developed further. The thought of both, or at least one of them, becoming a succubus and taking the story in a new direction is interesting and might be something to consider.