A costume that’s shiny and cute is a good start

A Review of What Comes at Night by NJ van Vugt 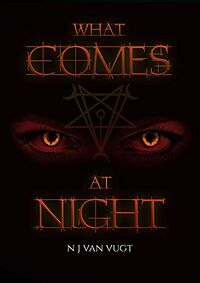 What Comes at Night by NJ van Vugt

The ensnaring of a soul in succubus stories can be told poorly, being not much more than the erotica, or be something more complex and delightful in its exploration.

Sometimes it isn’t the game one expects and if there’s games within, that can make a story that much more interesting. A review then of a story of a unique succubus and the soul fighting against her.

Hannah came ready to party for Halloween, but she didn’t expect to be so quickly hooked by an unrecognizable guy in a demon costume. There’s something about him that has her ready to take her clothes off on the dance floor. The mystery party-goer is just as ready to get dirty, but as things proceed, Hannah begins to think he may not be who or what she thought. Funny thing is, even as she realizes something is wrong about him, she’s unable to make herself stop.

Solomon is in all kinds of trouble and he needs to make some money. A misstep brings him into the presence of Olive who offers a deal he cannot refuse. But soon he discovers that there’s more to the deal and it might cost his soul.

Olive, the succubus of the work, is very much a seductress at the start, but as things progress her true nature, and needs, become far more obvious. She isn’t a stereotypical succubus, though there are some aspects that fall into that category. It’s how she’s created her trap, how she draws and controls the souls around her that I think was told very well. Her deviousness and manipulations are told well and how they affect Solomon adds the measure of darkness her character suggests to the story.

The story being told from Solomon’s viewpoint works well, there’s a certain accent to his thoughts and the story’s dialogue that were unexpected, but fit well. At one point there’s a bit of a story disconnect that didn’t work and perhaps there’s a paragraph or two missing in that moment. Still, a very good story with complex main characters and good heat in the erotica that works well.

A really well told story of seduction, entrapment and need which leads into some really unique fetishes. I’d have liked more about Olive, about the club as well. There’s some world building that needs to be explored. The ending was a bit too expected, which was a shame all things considered. Perhaps a following work in which Solomon has to face Olive and her kind would be a thought to explore.