A Review of Hannah’s Halloween Demon by Elle A. Wild 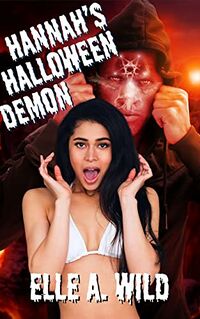 There are some characters that just aren’t really that appealing. Perhaps it’s the voice that seems to come from their words that takes something away.

Attitude, even a bad one, sets a character’s tone and if they aren’t very appealing at the beginning of the story, how does the story keep your interest? Erotica alone isn’t really enough most of the time.

Hannah came ready to party for Halloween, but she didn’t expect to be so quickly hooked by an unrecognizable guy in a demon costume. There’s something about him that has her ready to take her clothes off on the dance floor. The mystery party-goer is just as ready to get dirty, but as things proceed, Hannah begins to think he may not be who or what she thought. Funny thing is, even as she realizes something is wrong about him, she’s unable to make herself stop.

Hannah decides to attend a Halloween party and in the midst of people playing at being ghosts and goblins, one devil turns out to be more than she expected.

The story being narrated from Hannah’s viewpoint gives an accent to the story, a personality that took something away from the heat. Her personality comes through very clearly, but at the same time it reads oddly, almost disconnected from what’s going on. That made the heat less for me, the story not as interesting as it could be as well.

The incubus of the work, who is never given a name, is self-assured, dominant and is very close to the edge of being stereotypical. He’s not quite evil, it’s more that he’s focused on sex above all else. Again, the makes the erotica read at times like an adult movie, and perhaps something more could have been done to build the heat, add more seduction and just give the story something more beyond the smouldering heat that appears.

Somehow I expected something more from this work, but overall it’s a hot and fun read. Hannah was interesting, if somewhat irritating, and the incubus was seductive, but turned a bit stereotypical by the end of the story. Giving him a name would have been nice, and perhaps drawing out the tease would have been more appealing too.