Being Fulfilled by TeraS

It’s not quite a Devil Costume but it can be

A Review of The Ouija: A Halloween Erotica Special by C.B. Blackburn 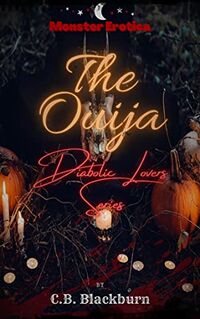 The Ouija: A Halloween Erotica Special by C.B. Blackburn

It varies with author and setting of course and as such whom the incubus character is depends on what the story needs. It’s a shame, at least for me, when the character isn’t all they could be.

Luna came back to Salem after finishing college, and just in time for Halloween, the special day of this town. Her grandmother left her legacy to Luna, her granddaughter. She and her friends find an Ouija board in a chest in the attic of the house and decide to play with the occultism to kill some boredom, only to do something… much worse.
The demon they summoned is not a joke and he is dead-set to settle an old vendetta from the 1800s that is related to the gorgeous and enigmatic Luna, whom he wants to dig his claws in and break her until all she knows is HIS NAME… that she will scream once he is inside her.

Luna returns to Salem and discovers an ouija board. But some things should be left alone and when they summon a demon who seeks vengeance, there are no games being played for anyone.

The work is a mixture of erotica, horror and domination which tends towards being harsh and unforgiving for the characters. As such there’s not a lot of light moments or hope through the majority of what happens. It’s dark, as would be expected considering the demon that appears.

Azol, the demon of the story, overall is an incubus with a single thought within them and there’s really not a lot else to be found. He’s very much a stereotypical demon of sex and lust and that’s used to drive the story onward. But there’s really no seduction or temptation. His focus is on some kind of revenge and little else matters or gets in the way of that.

As such the story just didn’t appeal very much overall. Yes there are a few hot flashes from time to time, but then the domineering aspects of Azol take over. bThere is some heat in the storytelling, but Azol is too stereotypical for my liking as a whole. He might not be fully an incubus, even if his appetites are telling. I just couldn’t find my way into the story fully as a result. For some this will be of interest, I just didn’t enjoy the story as much as I wanted to.

Lust and need alone leaves I think a lot of story and character development to the side. There’s an interesting story and characters underneath the driving domination that exists. Perhaps in telling more of that, and a bit less of what Azol does would have been something to think about.