Succubi Image of the Week 730

A Review of Dealing With a Devil by Adrienne Kingsle 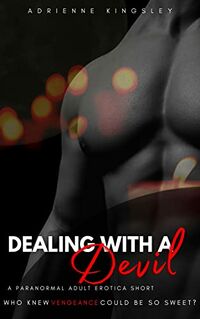 Dealing With a Devil by Adrienne Kingsley

Seduction, as the focus of a story, can be a lot more interesting when there’s two personalities jousting against each other.

It’s more so when the underlying tension is tempered with mischievousness. A review then of a work in which the unusual somehow has something familiar within.

Let’s make one thing clear: I never actually thought that the summoning spell would work. It was supposed to summon ‘that which I most desired’. Personally, what I thought I wanted was vengeance; turns out, the universe thinks I’m just extremely horny. Imagine my surprise when a six-foot-something incredibly hunky, incredibly cocky incubus suddenly popped up in my apartment, demanding that I fulfill some “contract.” Contract? He thinks I need to get laid, and he’s pretty damn insistent about proving the point. Turns out, inviting a sex demon into your home has some pretty obvious consequences, and the contract he needs fulfilled? I’ve always been warned against Dealing with a Devil, but you know what?
Vengeance has never been so sweet.

Liz doesn’t really expect the spell she found on the internet would amount to anything substantial. But she’s summoned an incubus… in the midst of brushing his teeth. It’s one thing to summon a angry demon, it’s quite another to summon an amused one.

The work is a delightfully fun hot flash piece of erotica with characters that play against each other in the most captivating ways. The story is fun, there’s wonderful snark from both, but as things develop and the attraction takes over, it’s just temptation told really well.

Alexial, the incubus of the work, is a breath of fresh air as a whole. He’s seductive, opinionated and once he has an idea of what Liz is like, things just become wonderfully hot. That leads into the erotica which has heart and soul, but more so, it allows for romance and seduction between the characters.

Written well, there’s really nothing that takes away from the heat. What is missing, at least for me, is more about Alexial himself and his kind in this story universe. It really would have been nice to see more of that, to know more about incubi and, perhaps, open things to a larger story.