Please just say no to this costume

A Review of Succubus Desires by Nikki Crescent 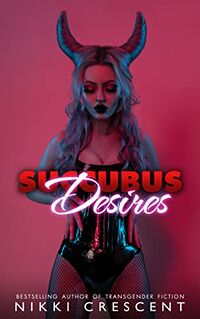 Nikki Crescent has written a number of futa themed works, and today’s review is of the second work she has done in which a succubus appears. There is a difference between need and want, it matters which of the two means more.

Perhaps in coming to realize that getting what you want isn’t as important as finding what your soul wants.

Dave bought his dream farmhouse with cash, almost for free. The views are incredible. The house needs work, but it has amazing potential. The countryside is stunning and quaint. But Dave has one big problem: there’s something in the house with him.
It comes out every night and moves around the house, making floorboards groan and walls creak. Dave has heard it giggling and humming like something from a horror film. Contractors run away after going into the basement, and things get scary whenever Dave tries to make any changes to the old home.
Something doesn’t want Dave there, but it’s willing to make a deal. If Dave wants to live in the house, he’ll have to pay the hung, haunting succubus with his body.

Dave is a lucky man, it seems as he has found the house of his dreams. But all dreams come with hidden secrets. Strange sounds turn into the whispering voice of a succubus who calls the house hers. Sometimes a dream changes, given the path offered, and when it does there’s a chance for something more that Dave didn’t realize he needed.

The work is an interesting mixture of mystery, erotica and a really well done character self-examination that together make the story far more than could be expected from the book summary. Dave’s self examination, the eventual confrontation with the succubus and what develops from that becomes an engrossing read.

The succubus herself, who is never named, is a delightful character. Her teasing is a delight, her dominant personality reads well. But most of all she’s not stereotypical, she has needs, and there’s a slight bit of vulnerability that gives the story something to hold onto as she presses on Dave as the story unfolds. She is a futa, but that’s really only touched on from time to time and doesn’t become the focus of who she is. There’s more to her and in the telling of the story that comes out really well.

I enjoyed the storytelling, the characters and how things developed. The one missing piece is that the succubus never had her name revealed. I think that’s a real disservice to the character, all things considered.

An enjoyable read, the succubus is delightfully fun and the story works really well. A follow on work I think would be a good thing, there’s a lot that could still be told with the characters and perhaps there will be.