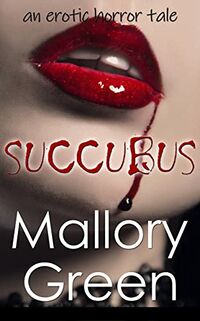 Not all succubi are seductive, there are those that are domineering, controlling and, at their edges, simply more a means for bad things to happen in a story than much else. A review then of a work in which there’s a feeling of dread, a state of loss, and souls losing their light and lives.

When Harry went missing in Las Vegas, his wife thought that she would never see him again. She missed her gravy train but was ready to party on his life insurance.
The Harry that came back to her was different. He took no crap from anyone. Worse, he was insatiable, needing her body more and more. Forced to serve him, she was living a housewife’s nightmare.
There was no end in sight until she learned that something evil had touched Harry in Las Vegas and that something wanted him back.
What happens when she’s forced to serve her husband’s every whim? Will she fight for what’s belongs to her? What happens when the succubus comes to suck Harry dry?

They say that what happens in Vegas stays there, but for Harry and his wife, that’s not true. Something happened there, something dark and evil and Harry isn’t the same as he was. But there is a price to be paid, one neither of them will escape. But the question is, do they really want to?

The work is a darkly told story of horror, evil and personalities which have very little in the way of light within them. It’s quite telling how evil both main characters are, the lengths they go to after Harry becomes caught in the trap of the succubus. The heat is mainly in the rough sex play erotic scenes that appear, and I didn’t find much of anything attractive in either character, but that’s sort of the point of the story. The work is told from the perspective of Harry’s wife and she’s an awfully evil personality from the beginning, which honestly makes what happens with the succubus and Harry fit her mindset well.

Morena, the succubus of the work, is a stereotypical succubus, having little morality or conscience. For that matter, her overall view of humanity is more of being playthings for her needs and then to consume them before moving onward. As such she’s a bleak character and there’s very little to like about her as well.

Certainly a different story, somewhat more horror than erotica overall. I just really couldn’t find my way into the story, but that’s mainly a personal preference. It’s an interesting read, there’s just no real hope or light in the work and as such I didn’t enjoy what happens to the characters.

A dark tale with dark characters at its core. As a horror story it reads well, but erotica wise there wasn’t much that attracted me. It’s a shame that so much time is spent in telling how dark Harry and his wife are. I wish there’d been something more.