Succubi Image of the Week 729

A Review of Calamity Hollow by Nicholas Steam 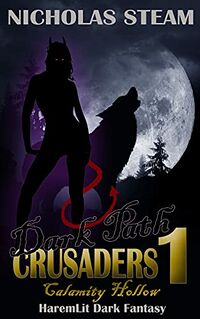 One of the most common themes in 2021 was that of something called GameLit which means that the story takes place in a world that’s run by statistics and feels very much like a role playing game being run overall. There haven’t been many of these works with succubi or incubi in them that I’ve enjoyed.

Perhaps it’s the feeling of the story being less about the characters and more about the game being played. A review then of the first work in the Dark Path Crusaders series that gives me some hope for something better.

I always thought I’d give anything to escape my tedious day to day existence. Now I’m transported to a dangerous and magical realm full of monsters and demons. One moment I’m in a compromising encounter in downtown Seattle, the next I’m dumped in a swamp called Calamity Hollow. The locals call it the ‘ass end of Hell’. For me it’s the beginning of the Dark Path – the only route out of this nightmare realm. Haunted by hags, zombies, and vampires, my companions are a gorgeous succubus and a cursed woman slowly turning into a toad. To survive, and save both them and myself, I’ll have to become a cultivator to drive back the darkness that threatens everyone and everything.

Gabriel doesn’t expect anything special in his life, but an encounter opens the path to another world in which all things are possible, including succubi. But there’s a price to be paid, whether he likes it or not and in the end, that price will matter more than he knows.

The work is a fantasy adventure with a little bit of erotica appearing from time to time. The story takes a while to get going and when the story needs to refer to stats it just derailed things for me. While that’s part of this kind of storytelling, there’s a point when the stats aren’t important. The story and characters are. In tha the work is told well, the characters are interesting and there’s a lot of promise here.

Deyja, the succubus of the series, is delightfully fun, intelligent and she’s very much a strong character. She’s not stereotypical and that gives her the interesting aspect of being something of a conscience in the story for the main character. That’s rather unique and I liked where that took the story as a result.

The work could use some editing in the dialogue which seems flat at times. There’s also a bit of a need for the story to be less about the stats and more about the telling of the story. There’s a good story here and if there’s less need to be so much in the game that would make this more captivating for me.

Hopefully the next work in the series will build on the characters more. There’s a few subplots that could be brought out and used to push the story onwards andI hope that happens. Perhaps in that what the characters desire will be what the story brings to be.