A Review of Succubus by Erika Jenkins 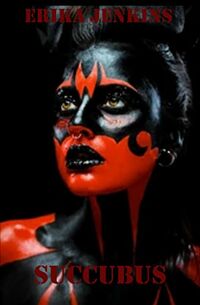 Sometimes a work about succubi tends to focus on the darker side of things. There’s not that much light to be found, whether in the characters themselves or the tone.

But if the characters learn something, if they are more than what they began as, that offers something interesting to be found.

Tyler and Anne are struggling in various areas of their life. On top of the mounting bills, they have a newborn baby. Tyler is exhausted and unsatisfied with their current situation. A visitor in the night adds a hint of spice to his life; a spice he can’t seem to get enough of. Who is this mysterious woman who visits his bed in the dead of night? He fears there is some hidden truth to her night visits. Will he be the victor or the victim of this night prowler. Find out what happens in this short story.

Tyler’s life is a maelstrom of problems, concerns and the feeling that something’s missing. In the midst of the strife an apparition appears in the night to claim him, body and soul.

The work is a rather dark and emotionally draining story which, considering that there is a succubus as part of the story, works well in describing the loss and terrors that Tyler undergoes. It isn’t, overall, a work of erotica though there are some moments when Elizabeth, the succubus of the work appears. She is stereotypical overall. She’s evil, single minded and while initially seductive, turns far more devilish as the story moves towards the climax.

The work could use an editing pass to clean the narrative a bit, it drifts and reads oddly at times. The dialogue could gain a lot from some more emotion as well, some of the character voices are flat and emotionless which felt wrong at times.

It’s an emotionally draining story with little in the way of hope or resolution. The way things end it feels like there needs to be something to follow, if only a chapter to tie things up. Perhaps within all of that loss there’s a bit of hope, but it’s really hard to find.