Succubi Image of the Week 727

A Review of Succubus: The First Encounter by Careem Mayfield 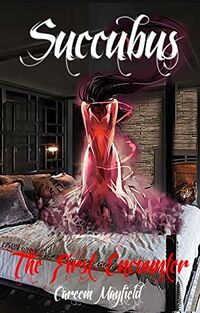 The single problem that keeps cropping up in many works I review is the issue of editing. It’s a shame when an interesting story lacks direction, the language is a bit off or perhaps more concerning, the words don’t fit the actions of the characters overall.

Perhaps in the midst of all of that there’s a story which is captivating and leads towards something.

Being a handsome, young man and a man of pleasure; Isaiah’s job description is a young, male escort, until Isaiah meets the girl of his dreams, Kattahlina, who appears to be a vestal, salaciously riding Isaiah’s soul to her next destination. For Isaiah, life takes a sudden turn for the worst when, his female clients start to end up dead after having visited them for a session. The enigma sets in and the question becomes, who is killing Isaiah’s clients? While being investigated by two detectives, Harthorne and Flamingo, the three of them team up with a gypsy, to solve the enigma of murders and bring the mendacious Kattahlina out of Isaiah’s soul. Meticulously, the two detectives, Isaiah and the gypsy, Lou-Bell, must hurry and make chaste of Isaiah’s soul because it lays perrill.

Isaiah is young as desired by many as he lives his life. An encounter with Kattahlina brings him into contact with a dangerous spirit who needs him and jealousy holds him. Some paths lead to pain, others to loss and he well many find the loss of everything isn’t worth the cost.

The succubus of the work, Kattahlina, isn’t in the story as much as I’d have liked her to be. The story dances around her, but she’s more of a thought than physically part of the story as a whole. Considering her nature, that does make sense and works well overall.

The work needs some editing however. It reads odd at times, the author seems to be groping for descriptive words, some words aren’t right and there are moments when the narration and the dialogue just reads somehow oddly.

It’s a bit odd of a story, it isn’t really overall a succubus one either, even as Kattahlina hints at what she is and what she can do. Scattered at times, a bit of a difficult read at times because of the editing, it offers something to consider, but it wasn’t really all it could be.