The 2021 Succubi Year in Review

Believe In Yourself–Part III by TeraS

A Review of The Succubus by Madam K. Alexandra 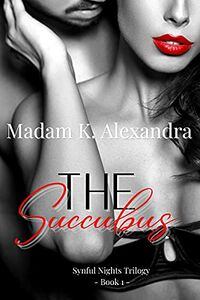 The Succubus by Madam K. Alexandra

Heat alone does not a good succubus story make. The succubus needs to be seductive, intelligent and have a power onto herself. It’s the telling of their story, those that are drawn into her world and where that takes both the succubus and others in the erotica that matters more.

A review then of the first work in the Synful Nights Trilogy series in which a delightful temptress appears and with her the story that brings amazing heat to explore.

Alexander can’t help but stare at the dancer. The red lingerie shows off every flawless curve of her body, her strong muscular thighs, and has his heart beating double-time. And the fact that she’s not falling all over herself to get more of his attention is amazing.
In fact, he feels like he’s the one that’s drooling. “Do you think I could get a name alongside the drink?”
She smirks at him over the rim of her glass, something vibrantly colorful. When she takes a drink, Alexander shivers. How can she make something that simple seem so sexy?
“You’d have more luck getting a lap dance.” She says after a moment, then gently strokes across his chest. “But I don’t know if you could handle that.”
Alexander almost groans. A woman after his own heart. Bold very bold. And he can tell it’s not a front. He takes a long drink of his beer and pulls out two twenties.
“I’ll take that bet.”
The woman eyes his money, then him, leaning her head to the side. “I guess we’ll find out, lover boy.”

Synthia, as a succubus, delights in her club within which passions flare and temptations delight. An unexpected need brings her to appear as one of the dancers in her club. But there’s someone there that Synthia catches the attention of, and the dance of temptation she discovers works on her as well.

Before anything else, and I love this work so very much, the author really needs a better book summary than the one that’s given by far, the story and characters deserve more. If there’s one thing that hurts this work the most, the book blurb is it.

The work is wonderfully hot, both in the erotica, but more so in telling of Synthia, the succubus of the work’s character, her thoughts, and the temptations that swirl around her. She’s perfect in her mood, her drive and overall she’s very much a succubus that’s anything but stereotypical. Her teasing nature, the hints of her power and where that takes the story I loved from beginning to end.

If there’s one thing missing about Synthia, it’s that there’s really so very little shared about her succubus nature. It’s mentioned in passing, there are little notes about her feeding on the lusts and passions around her, but nothing else. Giving her description and personality, it would have been nice to see her with horns and tail at least if for no other reason than to satisfy my curiosity about her.

The heat is very well done, the characters all have depth and a history that while not dwelled on is enough to give a glimpse into them and offer some backstory to delight the imagination. The cat and mouse game that Synthia plays as the story is told works really well and bemused me in how she played her hand and tempted throughout.

I adore Synthia, she’s delightful in her character and eroticism. It’s a shame that there’s really so little actual appearance of her being a succubus however. That said, I can set that aside for the heat of the story and how well the story is told. Being the first work in the series, I’ll hope that she returns and more about her is told. There’s so much unsaid and unexplored and I hope that will be.