Succubi Image of the Week 725

The 2021 Succubi Year in Review

A Review of The Succubus Situation by S. V. Kerres 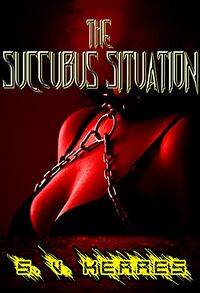 Most of the succubi that appear in stories tend to be mature, intelligent and occasionally devious. It’s a bit of a trope as a whole, but it leaves something untouched and that’s the question of what they were like before they became who there are.

A review then of a work in which a young succubus isn’t as smart or powerful as she thinks she is, and the trouble that gets her into.

A succubus has taken the Lord of a bustling town hostage. With the townsfolk worried and the commerce of the town having ground to a halt, the Lady of the town has hired Dain Anders, a hunter of beasts, demons, and monsters to take care of the situation and free her husband from the grasp of the demoness. He’s all too happy to help for the right price. The succubus, lounging in the great mansion of the Lord and Lady of the town, has no idea what sort of special techniques Dain is about to unleash upon her.

To Dain, a job is a job, even if that job is to free a town from the spell of a succubus. But Dain’s not new to this sort of thing and he’s well prepared. As for the succubus, she’s confident, strong, and possibly far too sure of herself. But then the young are lacking experience in many things.

Valia is somewhat stereotypical in her character at the beginning of the story, but Dain takes control and things become a battle of dominance, she becomes somewhat of a whining thing and it took away a lot from her. If some of her sureness had lasted longer, if Dian needed to battle more than he did, I think that would have added a lot.

That said, the story is fun, Valia amused me, and that made the story better than I’d expected. I do think that more time spent in making Valia more of a threat and Dain being less overwhelmingly sure of himself would have added a bit of danger to him and given more to the work overall. but it’s still a lot of fun.

I’d like to see a follow on story, perhaps one in which Valia has matured and is far more of a challenge to Dain than she was. It would be even more amusing if she’d come back and was working with Dain. There’s a lot of good story and characters here and it would be a shame to just let them fade away.