A Review of Little Slice of Hell by Clio Evans 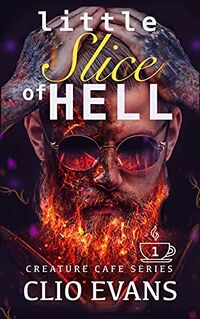 Love and desire can be an odd thing. One does not always fall into love, sometimes they are pushed or, more often, take a long and winding path to their happiness.

A review then of the first work in the Creature Cafe series that gives hope and passion, but also the darkest of pain.

Creatures of all kinds go to the Barista to find love, including the devilishly sexy incubus known as Dante. Dante wants to find his soul mate— someone that won’t scream when they see his horns, his tail, and his…other thing. Thousands of years of seduction and power, and he still can’t fill the hole in his heart. When the Barista sets Dante up with a human named Peter, he realizes that he’s never wanted anyone else more. Peter is resistant though, especially when it comes to the L word. Dante has his work cut out for him if he’s going to finally get his own little slice of hell.

Dante has been searching for his mate for longer than he can remember. The needs of an incubus can be powerful and only one soul can fit their needs. Finding Peter, the search seems to be over, but the past is there to press on them both, mates forever or not.

The work is a lovely hot piece of erotica and m/m romance in which the characters fit together very well. I liked the emotional connections between Dante and Peter very much, the passions in the gentler moments were told perfectly. Where I had some issues was when Dante became so very dominant, occasionally being somewhat overpowering and perhaps a bit too physically a toll to Peter. That’s a matter of my personal preference and past with submissives and how I believe they should be treated. I didn’t care for those moments, though I understand the need for them, Peter’s desires and Dante’s need to do so making them have to be part of the story.

Dante, the incubus of the work, isn’t a stereotypical incubus, but he is somewhat stereotypically dominant in his personality and I think that took something away overall. His overriding harshness just felt wrong somehow. Again, that’s a plot and character choice, but it just took away a lot of what I liked about the story and Dante himself.

Lovely emotion, a well told story and the characters all mesh together really well. The ending is a surprise, but fits the whole story and gives Dante and Peter something special. As part of a series, it would be interesting to see a succubus appear at some point, perhaps they will.

For those that like forceful dominants, the story will be a delight. I just don’t care for that aspect of this story. Past that one nitpick, it’s well told with passion and wonder that I did enjoy.