Tis the day of Christmas

A Review of All the Dark Reasons by Kitty Siberia 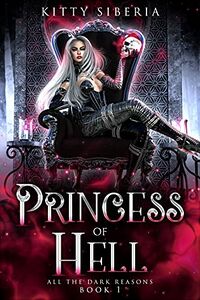 All the Dark Reasons by Kitty Siberia

Not all seductive demonesses are succubi of course, but sometimes it is really difficult to tell them apart.

That said, there’s something delightful in a main character who would love to be in love, or more aptly lust, and can’t quite get there without some interesting fashion sense. A review then of the first work in the Princess of Hell series by Kitty Siberia which promises quite a lot to come.

Being the Princess of Hell, Lucifer’s only daughter is not as awesome as it sounds. My father, Lucifer, is a very controlling single dad. After he caught me kissing a boy put a chastity spell on me. I am an Untouchable now! Literally! If anyone is touching me the shield around me is activated and the skin of the one touching burns.
I am Silver, princess of Hell and an undateable weirdo. Who wants to date or deflower a she demon knowing that her Dad is the ruler of Hell? Like every good princess I should be looking forward to getting married to some high-ranking demon I never met, a guy Dad picked out based on political reasons. I say F it! When the only heirloom from my mother, my necklace, gets stolen, I run away from home in a attempt to find it and retrieve it from the human realm.
Who knew that The Fates will have me cross paths with three hot werewolf shifters? This is going to be complicated because I have to hide my identity, find the necklace, get a hold of my mom who apparently isn’t dead and navigate through the relationship with Jacks, River and Drae. All without touching them… Could be easy if not for the hot mental asylum inmate I picked up, who has visions of me since he was six and my betrothed Caspian who leaves Hell to hunt me down. Ah, and Lilith, my father’s on and off girlfriend and the coolest stepmother a Demon could wish for! I can’t touch skin on skin but my imagination is very active and I find out that latex and leather games are lots of fun.

Silver has a problem and that’s her father the devil who’s made it impossible for her to be intimate with anyone. But not all curses are unsolvable, not all needs can be met either. But when the single thing she holds most dear is taken, there’s nothing she won’t do.

Silver, the main character, isn’t exactly a succubus, though she has some aspects of that within her character. Perhaps the most telling thing about her is the relationship she has with Lilith and where that takes the story at one point. There are succubi and incubi to be found, but they are fleeting and really don’t add a lot to the story. Most of the heat comes from Silver and her encounters with other characters, the means she finds to overcome her father’s curse is just fun.

Overall, the story reads very well, the characters have depth and there’s a lot of growth in them as the story unfolds. The ending is a bit of a cliff hanger, which works well as a hook towards the next part of the series. Some of the dialogue needs a bit of tweaking, it sounds odd from time to time. There’s also a few points, mainly around Lilith’s appearance, that felt too rushed and missing something important.

There’s really very little in the way of succubi or incubi characters, although Silver is close to being a succubus and there’s all sorts of questions about Lilith to be answered. I’m looking forward to seeing where the series goes from here and I’m hoping there will be something more in a succubi way to be found.