Make An Effort by TeraS

The gold doesn’t help this costume at all

A Review of The Unwilling Succubus: Tales of the Shape Shifting Demoness by Anthony Fyver 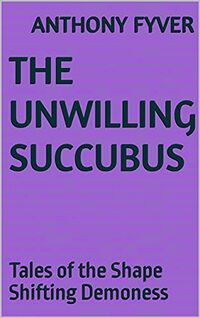 The Unwilling Succubus: Tales of the Shape Shifting Demoness by Anthony Fyver

Personality matters in storytelling, especially when it comes to succubi and those that are captured in their orbits during the story.

It can be quite interesting when they first are playful, but then their hidden motives reveal themselves. A review then of a work in which the main character has a problem and there was no way to avoid it.

Waking up to find the woman he dreamed of lying naked in his bed, Adrian is asked for help by the nubile Talith, a succubus who wants to break free from the oath binding her to the queen of sex demons.
As his resolve was being assailed by her ever changing form, she finally shows him what a sex demon is all about and makes his dream of being with a futanari come true.

The work tells a story that mainly focuses on the erotica that Talith brings to life, her powers of transformation and illusion which all combine in wrapping Gerard around her tail. There’s some cute and hot moments at the beginning, but as her needs and true plans appear, she’s a bit less seductive than she was and more dominant and controlling. It’s a good change in her character, it adds a lot to the story too.

The erotica runs hot and cold as the story moves towards the ending. There are points where it becomes a bit harsh and brutal in what Talith does and that didn’t interest me. She’s far more the seductress in the beginning and that was far more delightful and hot erotica storytelling.

The work needs another editing pass, there’s a number of word mistakes that need to be looked after. As well, some of the dialogue reads flat in tone, needing a bit of improvement. While the main characters are interesting and I like them both, the story reads in a way that feels clipped with parts missing. There’s a lot to like here, I’d like that to come fully out.

From how the story closes there should be another work and that I think that’s an interesting place for the story and characters to go. There’s still a lot unsaid about Talith and her kind, how their world actually works and just why Gerard is that important. As well, the opening of the work does leave a lot of questions about how he winds up where he does in the future. A lot of promise, but a bit more care in the editing would make things so much better.