Make An Effort by TeraS

A Review of Summoning The Sapphic Succubus by A.S. Harper 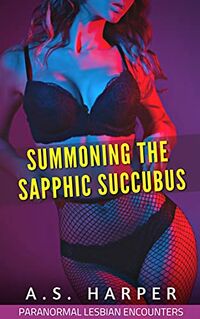 A review then of a delightfully seductive story of submission and falling to the questions within one’s soul.

Katie and Amber are spending the night enjoying a scary movie that sets a mood. A book opens the door to possibilities and when they summon the succubus Asmoda, no dream is impossible and no desire unfulfilled.

The story is a slow burn piece of erotica with some lovely heat along the way. There’s a bit of a dominance theme with Asmoda, but it’s not overdone and sets up the balance of the story well. What’s particularly appealing is how the story seduces events rather than forcing or demanding them. The characters give into their desires eventually and the just makes the heat even better.

Asmoda, the succubus of the work, is everything I’d hoped she’d be from beginning to end. She’s seductive, suggestive and delights in the temptations of Katie and Amber. But beyond that, it’s the joy in her drawing out the underlying passions of the two friends that makes this work something special. She’s not stereotypical, and that mixed with her attitude and teasing nature made everything that comes from the story a wonder to read.

The work reads very well, the characters have personality, needs and drive that fit together in lovely ways. There are two points at the beginning of the work where slowing the story would help I think, it just moves a bit too quickly into the erotica and need not have. Beyond that, the other thing I think would be nice is more focus on Asmoda’s departure from the story. I feel like a tease at the end of her watching the girls going forward, or they calling her back would have been a lovely close.

A wonderfully sexy and seductive story with characters that are delightful and fun. What’s missing overall is more about Asmoda herself. I’d have liked to know more about her, she’s not stereotypical and explaining that would have been wonderful. Nonetheless, one of my favorite stories of the year.