Succubi Image of the Week 723 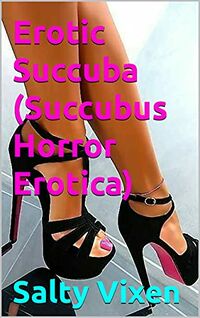 I’ve reviewed a number of the author Salty Vixen’s works here on the Tale in the past. They tend to have their moments and at the same time some of the horror aspects just don’t work well for me.

That’s a matter of personal taste of course, but getting past that issue I usually find there’s a interesting story and the characters are quite captivating to consider.

…..I tongued her pussy and she gasped again and again. her breathing became ragged and her body shivered. Then she cried out, suddenly, harshly. “Oh Philomena.” and the warm wet rush of her love juices flowed into my open mouth…..

Philomena encounters someone beyond words in the midst of her drawn out existence. A moment of passion leads to an eternity of pleasures in the arms of Elbis. But there is a price in blood as part of the deal for which Philomena finds she’s more than willing to do.

The work overall mainly is focused on Philomena and her eventual transformation into a succubus at the hands of Elbis. The erotica has some lovely heat at times, and with that comes some well told character development for Philomena overall. There’s also quite a lot of horrific moments which I think don’t add as much to the work as could have been. It’s a bit of horror for the sake of it and only really made a deep impression on Philomena’s character a few times.

Philomena herself, being the focus here, I think might have been more developed than she is. Similarly, Elbis leaves a lot of her character unexplored and that, overall, is really where I feel the story is lacking the most. Given who she really is, and the story that could be told from that perspective, it’s a lost focus which is a bit disappointing.

The work needs another editing pass, mostly for dialog as it’s a bit clunky at times. It might also be nice to expand on why things happen more than the story does. It also might be an idea to slow the story’s pace as well, if only to give the story a chance to catch up with the action before moving onwards.

Philomena seems like a character that needs to return in a future work. There’s a story about her that needs to be told. Similarly, Elbis could have her own tale, there’s a lot to be fleshed out about ther. I don’t think that doing so would need the horror aspect however, they can stand on their own personalities very well. I’ll also note that the book summary the author gives isn’t one. It’s a clip from the story and doesn’t tell what’s being offered and it would be something to improve on.