Over Tea by TeraS

A Review of The Deluded Demi-God by S.E. Babin 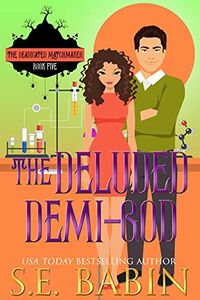 The Deluded Demi-God by S.E. Babin

Matchmaking is an art, sometimes it’s more of a train wreck as things aren’t always perfect. But occasionally the problems give way to something more and that’s where things become so much better.

A review then of a work in the Deadicated Matchmaker series by S.E. Babin today in which even an incubus may find their match.

Misty Anagnos is no stranger to dirty looks and snarky comments. After all, she is the most hated woman in town. As the daughter of Eris, the Goddess of Discord, Misty works hard to keep her head down and her life drama-free. She ignores the hateful people of the town and spends most of her time working on her new skincare business idea in the deep recesses of her basement. But when the idea begins to bear fruit, Misty realizes she’s the talk of the town and the hottest bachelorette in years.
Harry Wilder knows skincare. After all, as an incubus, looking good is his number one priority. But when an accidental meeting with a woman who has the most incredible glowing skin he’s ever seen turns his world upside down and he realizes she’s sitting on a gold mine idea, Harry will do anything to keep another from claiming her. Even go up against the shadowy Deadication Dating Agency to ensure he’s not just her perfect match…He’s her only one.
But Misty is no pushover. Underneath all that beauty, Misty has a mind like a steel trap and a savage streak. And while he might underestimate her, there’s no underestimating her insane family and how far they’ll go to protect her.

Misty is on a mission, one that her mother doesn’t think a lot of, but then her mother enjoys chaos after all. Still, dreams matter and Misty’s dream could give her everything she wants. A chance encounter with Harry, an incubus that isn’t what he’s expected to be, is on her mind. But there’s problems around the both of them that could turn dreams into nightmares.

The work is a delightful and fun romance/supernatural theme story in which the characters are wonderful in their personalities and stories. Being that this is a work in the middle of a series, that’s to be expected of course. Beyond that however, it’s the personalities of Harry and Misty that hold the story together and do so well. There’s fun moments, but also conflict and reflection in each that develops their characters in ways that weren’t quite expected.

Harry, the incubus of the work, is described as a good incubus and i think that term fits him very well. He’s the exact opposite of what incubi are expected to be and being so that endeared him to me. He’s thoughtful, has a sense of honor and doesn’t want to do harm. It’s quite telling as the story tells it, what others think of him and while that’s expected, it’s really so very sad.

This is a romance work, there’s little heat or erotica, but that would have just taken so much away from the story and the characters. The moments of intimacy are perfect and I enjoyed the fun, but the desires too. If there’s one thing missing for me it would be more about Henry’s past, more about his life before Misty. Still this isn’t so much about Henry as it is about Misty so the story turns out that way. Nonetheless it’s a fun work and very much enjoyable.

The glimpse of the Underworld and how that connects to Henry’s sense of honor and compassion really interested me. I’d love to see what happens with the other incubus seen in the underworld, perhaps they will become a story at some point. A lovely, cute and compassionate story that I enjoyed very much. I just wish there was more told of Henry’s past than there was.