Find A Way by TeraS

If it needs a label it’s not a good costume

A Review of The Black Cat Cocktail Club by J.R. Rain and H.P. Mallory 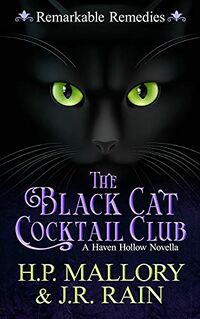 Some time ago I reviewed a work in the Poppy’s Potions series by J.R. Rain and H.P. Mallory in which there is a succubus character named Fifi. I rather liked her, wanted to see more of her and learn more about her.

A review of a short side story this time in which the rare appearance of a drunk succubus appears.

The women of Haven Hollow aren’t your typical forty-something singles. Poppy’s a gypsy who creates potions, Wanda’s a witch, Fifi’s a succubus, Libby’s a zombie, Darla was once a ghost but now she’s corporeal and Bailey’s a medium.
When they find themselves forming an unlikely friendship over potion-brewing and booze, Wanda decides their impromptu group needs a name. But, somehow, ‘Flushed and Forty,’ ‘The Haven Hollow Hoochies,’ and ‘The Witchy Winos’ aren’t exactly cutting it.
When Hellcat, Wanda’s feline familiar, starts stealing sips of various libations, Poppy tries to bat him away and accidentally knocks an experimental potion into her drink. Seizing an opportunity, the cantankerous cat immediately swallows down Poppy’s beverage and… vanishes!
As soon as they realize Hellcat is no longer in the house, it will become a mad dash to try and find him in order to reverse whatever magic Poppy inadvertently subjected him to.
And somewhere along the way, they just might find a fitting title for their boozy bunch.

Sometimes there’s nothing better than sharing a drink with friends. Unless you are all supernatural beings and the drinks get a bit wild. Still, not much can go wrong for the most part. Usually.

The work is a fun tale of a number of the main characters in the series getting together for drinks and togetherness that goes a bit wrong. It’s a cute adventure that works really well and adds some interesting aspects to most of them.

However, Fifi, the succubus of the series, is barely present, doesn’t add much to the story, save for her being a bit drunk and then disappears as the story continues. It’s a shame really, Fifi is interesting on her own and adding more depth to her would have been nice. This work was originally a work in a collection and it focused on the main character of the series Poppy. As a result Fifi really is mainly for humorous effect in the story and then just fades away.

That’s a bit of nitpicking I know, but it felt like Fifi could have not appeared and the story wouldn’t have changed much as a result. As such this isn’t really a succubus story, it’s a succubus flash amidst all else.

It’s a cute and fun story and it’s nice to see Fifi again. It’s a bit of a shame that she’s so thin in the story, there’s an interesting idea that comes from her that doesn’t go far. As a result this isn’t much of a succubus story, it’s a new layer of development in the series however which was a nice read.