A Review of Don’t Ask, Just Take by K.C. Kane 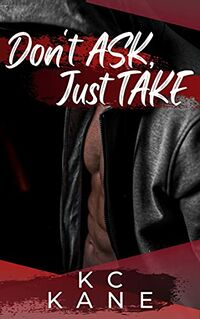 There are some stories that I can’t quite get deeply into. Sometimes that’s the characters, other times it’s the story.

But more often than not it’s a question of my view of how submissives should be treated and seeing something occur that just doesn’t sit well. It may be the character’s need, it may be what they desire, but even so, there’s just no heat when that happens for me.

A man by the name of Eddie Winters is trying his best to eek out a lower class living. One night, he makes a mistake that leads to chain of odd events. Shadowy figures in the corner of his eye, strange nightmares, faces where faces shouldn’t be . . . all act to bring him face to face with his inner demons, an actual demon, and a horrible choice.

Eli’s character as a succubus runs hot and cold, his personality changing to meet Landon’s needs. That fits the story well and it does allow Eli to give Landon what he desires. But the erotica itself is harsh, somewhat over the top and, at least for me, didn’t have a lot of heat. I understand why the story turns in the direction it does, how things develop, but overall it just didn’t sit right with my experiences as a Domme. I’m sure to some this work has heat and it will be what they desire, but it just didn’t have much for me.

The work could use another editing pass to clean up the dialogue and make it better. At times it’s flat, needing emotion, and doing so would have helped a lot. It also would be nice to tell more about Eli as well, there’s a lot of story that just doesn’t appear.

The story has its moments, but the erotica just didn’t work for me. I’d like there to be more depth in the story, more character development too. But otherwise the world building and story idea is delightful, it’s just a shame that the erotica wasn’t what I’d hoped for.